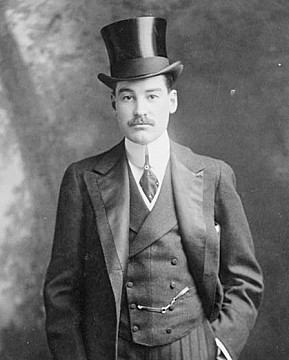 He grew up between the Vanderbilt Chateau on Fifth Avenue and The Breakers in Newport. After graduating from Yale in 1899 - a member of the Skull & Bones of course - he left for a round-the-world tour but on arriving in Japan was recalled home on receiving news of his father's death. As his eldest brother had died in 1892 and his one elder brother, Neily, was famously all but disinherited for his choice of wife, Freddy now found himself with a $36.8 million fortune to accompany his dashing good looks. Having been snubbed with $1.4 million, Freddy gave Neily $6 million.

Freddy also inherited his father's stud outside Newport, Oakland Farm, and his fortune allowed him to indulge his passion for all things equine. The following year, he failed in his attempt to break the record for setting the quickest time to drive a four-in-hand from Newport to Boston. Nonetheless, as a director of the International Horse Show Association, he frequently travelled to London to show and judge horses, and on one occasion shipped 100-horses across the Atlantic just for a single show.

He was married at Newport in 1901 to Elsie Tuck French. But, he had a reputation as a womanizer and the time he spent away from home did nothing to rein in his ardor. After his affair with Agnes Ruiz, the wife of a Cuban diplomat, his philandering became too much for Elsie and she filed for divorce in 1908. Initially living with her brother, Amos, at Tuck's Eden in Tuxedo Park, she retired to Harborview where she lived out the rest of her days happily married to her second husband. In the meantime, Freddy's attentions switched to another, Maggie Emerson, and Agnes promptly shot herself - one of four women who apparently committed suicide after having their hearts broken by him.

Maggie and Freddy were married in 1911. They lived between Oakland Farm and their apartments in the Vanderbilt Hotel which Freddy opened in 1912. Two years later, while travelling to London aboard the RMS Lusitania on Horse Show business and to present a fleet of vehicles to the British Red Cross, the ship was famously torpedoed. Freddy could not swim, but gave his lifejacket to a young mother. The last hours of his life were spent gathering up children and putting them in lifeboats. Distraught, Maggie leased their apartments in Manhattan and moved to Ventfort Hall. He was survived by three sons.

Dead Wake: The Last Crossing of the Lusitania By Erik Larson

Lusitania: Triumph, Tragedy, and the End of the Edwardian Age By Greg King & Penny Wilson