Built from 1701, for Abraham Gallatin (1650-1722), a relative of the distinguished Swiss-American Albert Gallatin (1761-1849), the founder of New Geneva in New York and the longest serving U.S. Secretary of the Treasury. Situated on a hill overlooking Lake Geneva, the Domaine Saugy was acquired in the early 1800s by the only daughter of the Russian Countess Praskovya Bruce (1729-1785), one of Catherine the Great's most trusted confidantes - said to have had the role of testing the sexual prowess of the Empress' potential lovers! In 1823, Saugy was purchased for $50,000 by America's first multi-millionaire, John Jacob Astor (1763-1848), who wished to take a break from his business responsibilities in New York and moved in with his youngest daughter, Eliza....
zoom_in 3 images 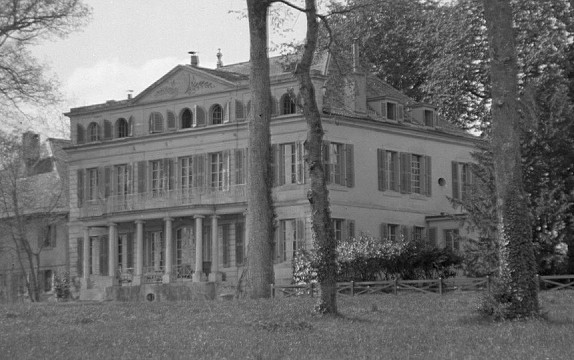 Count Vincent Rumpff, Ambassador of the Hanseatic Cities in Paris

Astor's property portfolio was being well managed in New York by his son, William, but he was unable to switch off entirely and Saugy soon became the unofficial headquarters of the American Fur Company. In 1825, he delayed his departure to New York to walk Eliza down the aisle on the occasion of her marriage to Count Vincent Rumpff (1789-1867), and the villa was his wedding gift to the couple. Eliza was delighted and the Rumpffs spent their summers at Saugy and their winters in Paris where Vincent was an Ambassador.

There is a double turreted pavilion that can still be seen on the shores of the lake beneath the villa that is today named "Bains Astor" to commemorate its first American owner. But, it was in fact built in the early 1800s by its previous owner, the Countess Catherine (Yekaterina) Bruce, who died without children in 1829. Her husband, Vasily Musin-Pushkin-Bruce (1775-1836), was a former Chamberlain and a well-known Patron of the Arts, being Chairman of the Russian Imperial Society for the Encouragement of Artists.

Eliza too died without children in 1838. Her husband lived on until 1867 but never remarried and it is unclear whether or not he held on to Saugy or sold it. Fast-forward another forty-or-so years and Saugy found itself with another American chatelaine: Edith Berwind (1879-1963) of Philadelphia was the second daughter of the founding partner of the Berwind-White Coal Mining Company. Her father died young and the company was continued by his younger brother, Edith's uncle, Edward Julius Berwind, who is most famously associated with The Elms in Newport. In 1908, Edith married a young German Cavalry officer, Baron von Kleist, and they took took up residence at the Villa de Saugy, where she lived until her death in 1963. Their daughter, Asta, was married here in 1933.

After Edith died, Saugy was purchased by the banker Jean Lullin (1893-1985), who having no heirs of his own gifted the Domaine to the Canton of Geneva in 1973. Today, it is used for conferences and the majority of its grounds are open to the public.

Catherine the Great: Portrait of a Woman By Robert K. Massie

A Drop of Ink By Megan Chance

The Fabergé Secret By Charles Belfoure

The Gilded Chalet: Off-piste in Literary Switzerland By Padraig Rooney