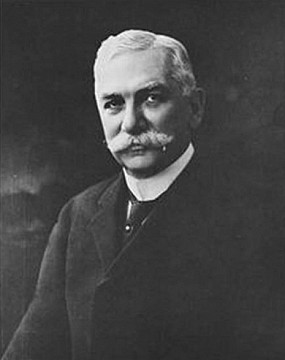 He was born in Philadelphia to German immigrants. He entered the U.S. Naval Academy at Annapolis but retired in 1875, five years after being commissioned as an officer. Instead, he joined his brother, Charles, in the coal mining business with Judge Allison White (1816-1885) and from 1886 their firm became known as the Berwind-White Corporation. Charles died in 1890 and Edward succeeded him as President of the company. Edward developed a close partnership with J.P. Morgan enabling him to expand his coal mining operations until he was considered the largest individual owner of coal mines in the world. By 1903, they were selling over 2.5 million tons of coal per year extracted from 105,000-acres of mined land, bringing in an annual profit of $8 million.

Berwind-White opened branches in West Virginia and Kentucky, before making their headquarters at New York. Like James Dunsmuir in Canada, Berwind ruled his empire with an iron fist and refused to bargain with his employees nor allow them to establish unions. The corporation was also heavily involved in shipping between the United States, the Caribbean and Europe; and, he joined fellow Philadelphian P.A.B. Widener in establishing the New York Subway. He died leaving a fortune of $34 million. Edward's wife, Sarah, was born in Italy, the daughter of a famous sculptor, and they both shared a passion for the arts. Their homes, The Elms, and 2 East 64th Street in Manhattan were built to house their magnificent art collection and both survive today. They died without children, but Edward was a father-figure to the daughters of his brother Charles.