Built in 1918, for Madam C. J. Walker (1867-1919). This historic Gilded Age mansion was built for the first female, entirely self-made African-American millionaire. It was designed by the first African-American registered architect in New York; and, until last year it was the home of the founder of the oldest African-American owned and operated investment banking firm in the United States. A movement was set to have this truly historic landmark of determination and success against the odds made into a house museum. In 2018, the owners sold Lewaro to The New Voices Foundation who with Sundial Brands CEO Richelieu Dennis will be using it as a Think-Tank for African-American female entrepreneurs. Madam Walker once said, "I am endeavoring to find employment for hundreds of women of my race," and her legacy now continues....
zoom_in 17 images 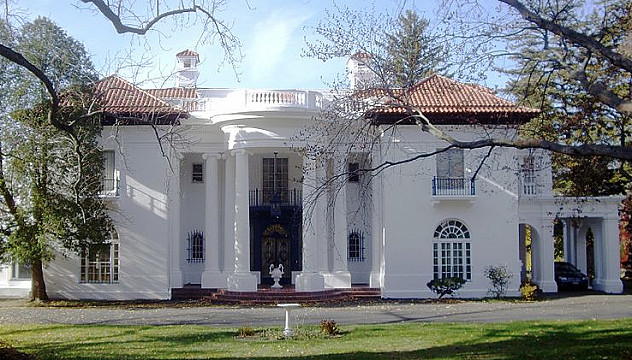 Fewer 19th century-born Americans than one might think can claim a true Rags-to-Riches tale on the back of hard graft. Not only did Madam Walker achieve this, but she achieved it against all the odds: not just as a woman in a mans world, but as an African-American woman in a far more bigoted world than today. Through her line of hair-care products, Madam Walker became the first female millionaire. As Jefferson had sought to make Monticello an Anglo-American inspiration, Madam Walker intended her home to be an African-American inspiration. On his blog, Michael Henry Adams summed this up:

Not for a moment was there ever the least doubt for her, as to why she was building such a showplace. Lewaro was a testament as to the ability and value of African American faith and enterprize, and every black in America knew it!

For her mansion, Madam Walker commissioned Vertner Woodson Tandy (1885-1949) in 1916, who'd just completed her townhouse at 108-110 West 136th Street, Harlem. It was no coincidence that Tandy was also the first registered African-American architect in New York. The facade of his design was an almost identical copy of two mansions in Connecticut designed by separate architects: Nyala Farm (1910) and Villa Rosa (1914).

Sadly, Madam Walker died just one year after her mansion was complete. A'Leila succeeded her mother as President of the Madam C. J. Walker Manufacturing Company and continued to live at Lewaro until her death in 1931. She left it to the National Association for the Advancement of Colored People, but as they were struggling, they were forced to sell it on that very same year. It became the Anne E. Poth Home for Convalescent and Aged Members of the Companions of the Forest of America.

In the 1980s, a developer tried to buy the mansion in an attempt to replace it with a block of condominiums. It was spared this ungraceful fate by the presence of two 300-year old trees which, of all things, earned it a place on the National Historic Register.
The Doleys

In 1993, the property was purchased by Harold Emanuel Doley Jr., (b.1947) and his wife, Helena Cobette. Doley was one of the first African-Americans to own a seat on the New York Stock Exchange and is the founder of Doley Securities LLC, the oldest African-American owned and operated investment banking firm in the United States. Doley was also fascinated by Madam Walker and her remarkable life achievements:

She was a genius… and to walk the halls that she once walked and to sleep in the room where she once slept is a feeling that is indescribable.

When the Doleys bought Villa Lewaro it was in a very bad state of repair. They lavished it with the care and attention to detail that was necessary to bring it back to its former splendor: they stripped out and modernized the plumbing and heating systems, rewired the house and repaired all its mechanical elements. They retiled the terra cotta roof with materials sourced from the original manufacturer while restoring the wall paintings in the music and dining rooms.
Villa Lewaro became recognised as a National Historic Landmark in 1976 and in 2014 it was designated a National Treasure by the U.S. National Trust for Historic Preservation (NTHP). From 2014, the Doleys and the NTHP started the movement to have Villa Lewaro transformed into a house museum, "to create a space dedicated to the achievement and empowerment of African Americans".

In 2018, having faced considerable opposition, the Doleys sold their beloved home to The New Voices Foundation who aim, "to help women of color entrepreneurs achieve their vision".  Along with Sundial Brands CEO Richelieu Dennis, Lewaro will now be used as a think-tank for African-American female entrepreneurs. Madam Walker once said, "I am endeavoring to find employment for hundreds of women of my race," and her legacy now continues. If you love this house or have a connection to it either personally or through your family, go to the top of the page and "connect" to record your place in its history. It will still require considerable support to see its dream realized.

On Her Own Ground: The Life and Times of Madam C.J. Walker By A'Lelia Bundles

Self Made: Inspired by the Life of Madam C.J. Walker By A'Lelia Bundles

African Style: Down to the Details By Sharne Algotsson