Completed in 1885, for Count Louis-Alexandre Foucher de Careil (1826-1891), the French Ambassador to Austria-Hungary and the Senator for Seine-et-Marne. Having purchased a small farm comprised of olive and lemon groves spread out on both sides of the coastal railway line, Foucher built his summer home here from 1882. The design is frequently attributed to the celebrated French architect Charles Garnier - best known for the Palais Garnier in Paris - but it was in fact designed by a local architect, Scipion-Aimé-Martin Jeansoulin, known for several other villas and hotels in the region. Villa Maria Serena is built over five levels with an open belvedere and a metal footbridge connected the two halves of the property on either side of the railway tracks....
zoom_in 7 images 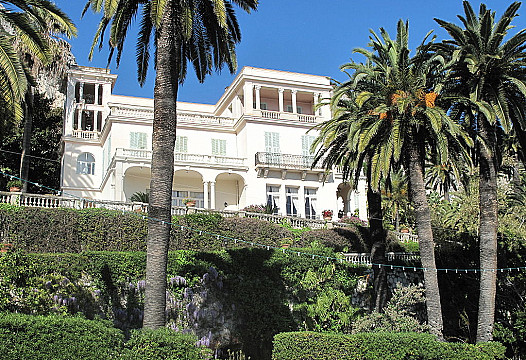 In 1922, Foucher's grandson, Louis-Jacques La Caze (1883-1964), sold the villa to the Anglo-American bachelor banker, Hans Henry Konig, who'd previously made his home at Ardenrun Place in Surrey. In 1929, he employed the architect Henri Cerutti-Maori to carry out various improvements: he added a further floor; kitchens to the rear; the north east wing for staff; the eastern portico onto which the Dining Room opens; and replaced the belvedere with a water tank. Konig returned to England during World War II and in 1947 sold the villa and gardens south of the railway line to the town of Menton, and the gardens north of the line to his head gardener. Today, the villa is the town's honorary town hall and its Botanical Gardens (known as "Little Africa") are open to the public.