Completed in 1909, for the unmarried Hans Henry Konig (1870-1949), formerly of New York. Situated near Lingfield in Surrey, this English baroque-style mansion influenced Philadelphia's Ardrossan and bore a distinct similarity to Old Westbury Gardens on Long Island, New York. It was situated on high ground within an estate of 1,000-acres and gained a degree of notoriety in the 1920s when it was owned by one of the "Bentley Boys" and Etorre Bugatti brought his cars here to race them up and down the drive. Otherwise, its history was a short one, destroyed by fire in 1933....
zoom_in 1 images 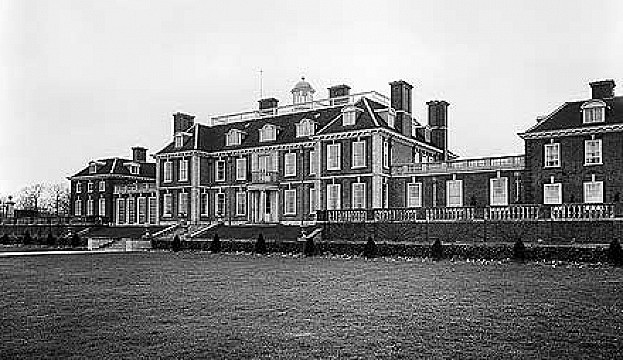 Hans Konig grew up between Germany and the Konig Mansion in New York. He and his brother, Frederick Adolphus Konig (1867-1940), were merchant bankers and at around the turn of the century left New York for England. They established the firm known as Konig Brothers of London and were afterwards naturalised as English citizens.

Their father had been a successful businessman and when he died at Dresden in 1905, the Konigs were left a considerable fortune. Frederick - whose grandson Andrew Konig married Nina Campbell of Nina Campbell Interiors - bought Tyringham Hall to which he made many improvements, most notably within the grounds, while Hans opted to build his own English country mansion on an estate of 1,000 acres in Surrey.

In 1906, Konig employed Ernest Newton (1856-1922) to design his new home - the same architect who would later serve as President of the Royal Institute of British Architects. Standing on an eminence so that it was seen from miles around, Newton constructed Ardenrun with Chichester purple clamp bricks for the general walling; Wrotham deep red dressings for the windows; deep red Wrotham tiles for the roof; and, Portland stone for the plinths, entrance porch etc. The stable block/garages were designed by architect John G. Gibb, M.S.A., who may have also designed the farm buildings and the entrance lodge.

Aside from the working farm, the grounds included a private golf course; and, in the basement of the mansion was a mock-Tudor pub (as at Sunken Orchard in New York) known as the "Ardenrun Arms". Two years after its completion, the house was given a 10-page write up in Country Life. In a rather haughty English description, it was described as, "a pleasant specimen of a country house. It makes no pretence of being older than it is. It looks well already and, given proper upkeep, should look better as the years go on".

Konig sold Ardenrun in 1921 and siting health reasons moved to the Villa Maria Serena in the south of France - the gardens of which are open to the public today.

"The Bentley Boys" and Bugatti

The new owner of Ardenrun was the privately wealthy British racing-driver Woolf Barnato (1895-1948), three-time champion of Le Mans. He was one of a group of racers known as the "Bentley Boys" and they used to race the half-mile along the drive from Tandridge Lane up to the still extant Moat Farm. Barnato and Etorre Bugatti, the founder of Bugatti Motors, were close friends and the latter reportedly brought several of his cars to Ardenrun to race Barnato from the house to the end of the drive and back again.

On January 21st, 1933, a fire broke out on the upstairs landing by the nursery and despite the best efforts of the fire brigade by the following morning Ardenrun had been reduced to a smouldering, roofless ruin that was never rebuilt. By 1971, the once immaculate gardens had become a wilderness and all that remained of the mansion itself was one derelict wing.

Bugatti: The Man and the Marque By Jonathan Wood. Foreword by Barrie Price

100 Years of Bentley By Andrew Noakes

Faster: How a Jewish Driver, an American Heiress, and a Legendary Car Beat Hitler’s Best By Neil Bascomb