Built in 1858 on the order of Emperor Napoléon III, this house and its neighbors were his gift - as summer homes - to the highest ranking officials within the Department of Parks and Gardens (headed by Jean-Pierre Barillet-Deschamps) who were responsible for laying out the Bois-de-Boulogne that was modelled on London's Hyde Park and finished in 1860. Their architecture was inspired by that of Louis XIV and they are all situated in their own private park on the border of the Bois-de-Boulogne. Originally known as the Chateau de Bois, from 1953 until 1986 this house sprung to fame as the main residence of the Duke (formerly King Edward VIII) and Duchess of Windsor....
zoom_in 1 images 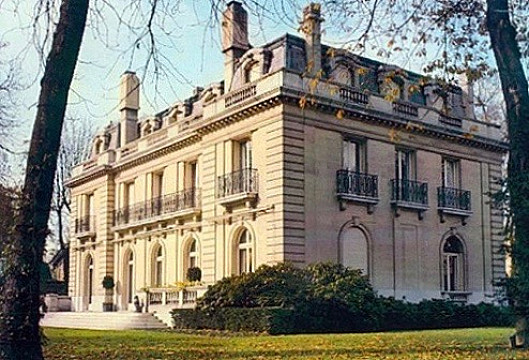 H.R.H. the Duke of Windsor, formerly Edward VIII of England

Despite being such a prominent house, the history of what is now referred to as the Villa Windsor is surprisingly obscure. Immediately before World War II, it is said to have belonged to the Renault family whose car factory was located on the opposite, south side of the Bois-de-Boulogne. It was more than likely occupied by the Nazis from 1940 when the mansions on the nearby Avenue Foch were overrun by the Gestapo so that it was dubbed "Avenue Bosch". After the city was liberated in 1944, the house was expropriated by the French government. From then until 1946, it was home to the French President, Charles de Gaulle, who lived here while he was renovating the Château de Bagatelle next door. During that time, de Gaulle had a Mercedes that belonged to Adolf Hitler stored here.

Following their controversial marriage (1938), the Windsors remained in France where they were given tax free status. They rented the Chateau de la Maye in Versailles for six months before taking up residence in Paris at 24 Boulevard du Suchet while leasing the Villa de la Croë on the Cap d'Antibes as a summer home. Just one year later, Britain announced it was at war with Germany and the Windsors were posted to the Bahamas. On their return they travelled frequently between Europe and the States, staying at hotels (the Waldorf in New York and Claridge's in London) and with friends such as the Rogers.

After the war, they kept a low profile due to the animosity they had incurred for their previous support of Hitler and from 1949 they lived quietly at 85 Rue de la Faisanderie, the former home of William K. Vanderbilt Jr. When it became clear that a return to England was not on the cards, their thoughts turned to a more permanent home, somewhere close to the city center for Wallis, but with a good-sized garden to keep the Duke entertained.

Fit for a (Former) King

In 1952, they purchased the Moulin de la Tuilerie - which they referred to as "The Mill" - just outside Gif-sur-Yvette. It was the only house they ever owned and being just 40-minutes from Paris it served as their weekend/country home. In the following year, as their townhouse, they settled on this 14-room mansion with two-acres of fenced-in gardens, taking it on a 50-year lease from the French government for just $50/year.

On taking up residence in their new home in Paris, they hired the interior designers, Maison Jansen, to redecorate under Wallis' careful supervision. Though the house is not huge, it was given a distinctly Royal makeover: the marble entrance hall made use of a trompe l'oeil depicting the Duke's garter banner; their footmen were attired in Royal livery; an antique floor-to-wall tapestry embroidered with the Royal coat-of-arms hung over the Duke's bed; and, the Duke's bedcover prominently displayed the monogram "E.R" ("Edward Rex") as a permanent reminder of his short-lived reign as King Edward VIII.

"A Fairyland of Fantastic Luxury"

Helped by her slender figure (she was nicknamed 'skinny'), unlimited resources, and with the best couturiers in Paris fighting over her, Wallis became recognized as the best dressed woman in the world. She had an eye for fashion and design and her home was no exception: one guest said it was, "like stepping into a fairyland of fantastic luxury".

The Grand Salon was inspired by that at Amalienborg, the home of the Danish Royal family in Copenhagen. Finished in pale blue and gold, the huge Aubusson rug was commissioned especially with an ostrich feather design picked out in silver to blend seamlessly with the room. On its walls, among other pictures, hung full length portraits of the Duke's mother, Queen Mary, and the Duke himself regaled in his Garter Robes. One end of the room led to the dining room (with panelling and a minstrel's gallery retrofitted from another chateau slated for demolition) and the other led to the library of which the focal point was Brockhurst's 1939 portrait of the Duchess that hung against a mirror.

The marble staircase in the hall leads up to the Windsors' private rooms while the third floor in the mansard roof was for servants and storage. Wallis' bedroom is finished in turquoise, or what she liked to call 'Wallis Blue' which formed a striking contrast with her red Persian rug. Between her room and the Duke's is a comfortable sitting room which focused on comfort over elegance. The Duke's room, already alluded to, was dominated by its Royal connotations and of course a profusion of pictures of the woman he adored.

The hall boasted “frescoes, tapestries and a Japanese screen” that was said to be a gift from the Japanese Emperor, Hirohito. Throughout the house, exquisite 18th century furniture was on display offset with equally tasteful objet d'arts and a ready supply of the Duke's favorite flowers, orchids, from his own greenhouse. Aside from a permanent staff of fifteen, other occupants included their beloved dogs (Cairns and Pugs) who were spoiled rotten and the Duke particularly enjoyed feeding them from their own little silver bowls.

A lifelong smoker, the Duke died here of throat cancer in 1972. As for the Duchess, she lived out her last years here as a recluse, with very few visitors. After dementia set in, she lost the power of speech in 1980 and was bedridden until her death in 1986. Nonetheless, her staff were still expected to address her as "Your Royal Highness" (a title which she was denied in the real world) and on no account were they to speak French.

After Wallis' death, the lease - which included almost all of the contents of the house - was taken up by the Egyptian businessman, Mohamed Al-Fayed, best known as the owner of Harrods in London. Aside from paying a million francs a year in rent, he agreed to restore the mansion to its original splendor at an additional cost of over $12 million. For his largesse, the French government made him an Officer of the Légion d'honneur.

It was Fayad who dubbed the house the "Villa Windsor" as it is commonly referred to today, and he considered opening it as a museum. In July, 1997, he announced that he would hold an auction of the Windsor's possessions (for which he'd paid circa $4.5 million), but after the tragic death of his son and Princess Diana the following month who had visited the house only hours earlier that day, the auction was put on hold.

Six months later, 40,000 items divided into 32 lots went under the hammer at Sotheby's in New York. Among the items sold included the desk from which Edward abdicated, personal letters, jewellery, numerous photographs, and even a slice of their wedding cake from 1937. The proceeds of $23 million went towards the Dodi Fayed International Charitable Foundation and other charities associated with Princess Diana. After 1998, Fayad left France to live in Britain, then Switzerland and then Monaco. As of 2019, the house remains in his possession, but is private property and not open to the public.

Behind Closed Doors: The Tragic, Untold Story of the Duchess of Windsor By Hugo Vickers

Princes at War: The Bitter Battle Inside Britain's Royal Family in the Darkest Days of WWII By Deborah Cadbury

The Shadow Queen: A Novel of Wallis Simpson, Duchess of Windsor By Rebecca Dean

Minick and Simpson Blue and White: Living with Textiles You Love By Polly Minick & Laurie Simpson

Mistress of the Ritz: A Novel By Melanie Benjamin