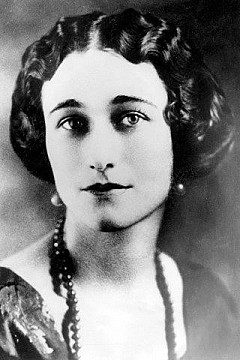 She was born at a hotel in Blue Ridge Summit, Pennsylvania - a summer resort popular with Baltimore society. She was christened 'Bessie' for her favorite aunt, Mrs Bessie Merryman, but was known by her second name, 'Wallis,' as was her father, named for Severn Teackle Wallis. As an only child who lost her father before she was one, she was brought up in Baltimore and her wealthy uncle, S. Davies Warfield, paid for her education at Oldfields School, the most expensive school in Maryland. In 1916, she married her first husband, Win Spencer, a pilot in the US Navy, but he was a heavy drinker and they often lived apart. Following a failed attempt to reinvigorate their marriage in the Far East, she travelled for a year in China - her "lotus year" where she was supposed to have matured both socially and sexually. Among others, she had affairs with an Argentine diplomat and an Italian Count who later became Mussolini's son-in-law and Foreign Minister. After returning to the States, she and Win divorced in 1927.

While still married to Win, she had started an affair with the Anglo-American Ernest Aldrich Simpson and they were married in 1928. Her mother died the following year, penniless after the Wall Street Crash. In 1931, Wallis was introduced to Edward, Prince of Wales. As their circles began to mix frequently, her husband's finances began to feel the effect and by 1934 Wallis had become Edward's mistress. They carried on much of their affair at Villa Lou Viei in Cannes and Edward quickly became besotted with her. He was crowned as King Edward VIII in January 1936 and in October Wallis obtained her divorce from Simpson. However, as King, Edward was also head of the Church of England and he was forbidden from marrying a divorcée. This suited Edward as he loved Wallis and did not want to be King. It did not suit Wallis, who wasn't as in love with him, and did want to be Queen. When Edward abdicated that December so he could marry the woman he loved, Wallis, who was back at Villa Lou Viei, was heard to yell, "you god-damned fool"!

After Edward's abdication, Wallis became the most hated woman in the world. Many years later she admitted that Herman Rogers had been her only true love, but being the woman for whom the King of England had forsaken the throne, she married Edward in a quiet ceremony (unattended by any of his family) at the Château de Candé in June, 1937. She was now styled the Duchess of Windsor, but was forbidden from being called 'Her Royal Highness,' which she resented bitterly. She never had children, the result of a botched abortion from when she was with the Italian Count. The Duke and Duchess of Windsor courted controversy again almost immediately after their marriage when they travelled to Germany expressly to meet Adolf Hitler. Because of their suspected sympathies towards the Nazis, she and Edward were posted to the Bahamas for the duration of World War II.

After the war, they considered living in the States and houses such as Mallow and Crumwold Hall were rumored as potentially suitable homes, but they remained in France, living from 1952 between Le Moulin de la Tuilerie and the Villa Windsor. Nonetheless, they were still regular visitors to the States and Wallis came under scrutiny again in 1955 for her actions following the shooting of Billy Woodward at Sunken Orchard. Edward died in 1972, after which Wallis succumbed to dementia and lived out her final years as a recluse. Having lost the power of speech by 1980, she died at her home in Paris in 1986. Her funeral was held at St. George's Chapel in Windsor Castle, attended by all the Royal family, and she is buried next to Edward at the Royal Burial Ground at Frogmore.

The Real Wallis Simpson: A New History of the American Divorcée Who Became the Duchess of Windsor By Anna Pasternak

Wallis in Love: The Untold Life of the Duchess of Windsor, the Woman Who Changed the Monarchy By Andrew Morton

17 Carnations: The Royals, the Nazis, and the Biggest Cover-Up in History By Andrew Morton