Completed in 1590, for Sir Edward Culpepper (1561-1630) whose family had owned the manor since 1454. Edward was nine years old when his father, Thomas, died and left him Wakehurst. The manor house was then described as, "verie ruinouse and altogether decaied" and in his will Thomas expressed his earnest desire that his son would build/rebuild a fitting family home. The works took Edward twenty years to complete. Wakehurst remained in the Culpepper family until "William the Wastrel" sold the estate for £9,000 in 1694 to Dennis Lyddell (1657-1717), Commissioner of the Navy....
zoom_in 7 images 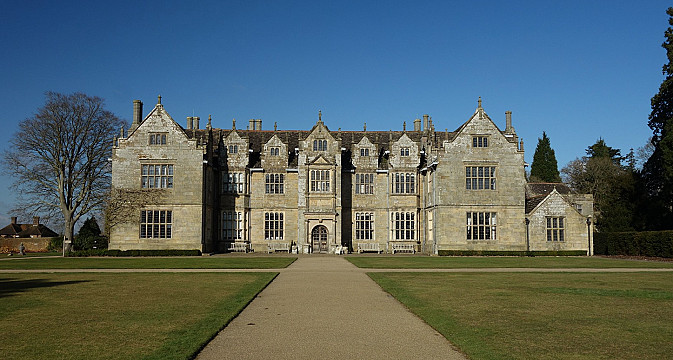 Lyddell's son, Richard, died childless in 1757 and he left Wakehurst to his first cousins, the Clarkes of Blake Hall. When Dennis Clarke LL.D., died childless in 1776, it was conveyed to another cousin of the Lyddells, Captain Edward Peyton (1725-1804) R.N. From 1816, it was leased to various tenants until purchased from the Peytons in 1869 by Caroline (1816-1893), Dowager Duchess of Downshire, who lived here with her second son, Lord Arthur.

In 1890, Caroline sold the estate to Sir William Boord (1838-1912), 1st Bt., M.P., who just 13-years later sold it to Gerald Loder (1861-1936), K.C., 1st Lord Wakehurst. He developed the core of the gardens as seen today by planting 3,000 species and cultivars in just five years. Loder died in 1936 when it was purchased by Sir Henry Price (1877-1963), "the 50-Shilling Tailor" who made a fortune producing affordable suits for those who traditionally could not have afforded one, eg. disbanded soldiers looking for work. Remembered as "the caretaker" of Wakehurst, Price made no changes but spent a great deal on its upkeep.

On his death in 1963, Sir Henry Price willed the property to the National Trust though his wife continued to live here until about 1974. Today, Wakehurst is known for its magnificent gardens which since 1965 have been managed by the Royal Botanical Gardens at Kew and attract 350,000 visitors a year. The National Trust maintains the house, but only a handful of rooms are kept open. In 1888, the Oxford-educated American James J. Van Alen built Wakehurst, an almost identical replica in Newport, Rhode Island.