Completed in 1888 for the widowed James John Van Alen (1846-1923). Wakehurst was one of the most ambitious projects of the many mansions built in Newport having been directly modelled on the English manor, Wakehurst Place, built in 1590. Predating many of the better known museum houses (eg. Winterthur etc.), it was Van Alen's that led the way in America for the concept of "museum rooms". Wakehurst was built to cheer up a grieving husband, though much as he had loved his wife there was no love lost between Van Alen and his father-in-law, William Backhouse Astor Jr., and a duel between the two (that's right, pistols at dawn!) was only avoided at the last hour....
zoom_in 20 images 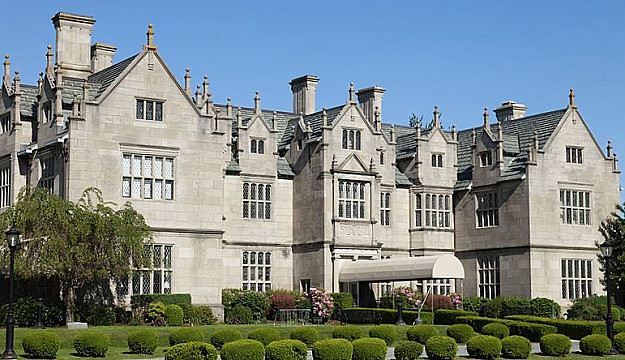 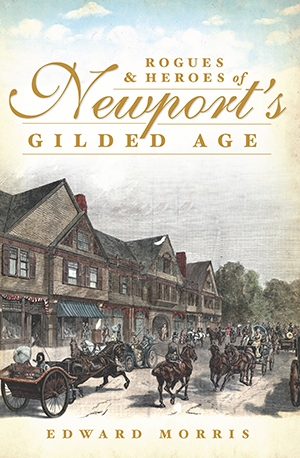 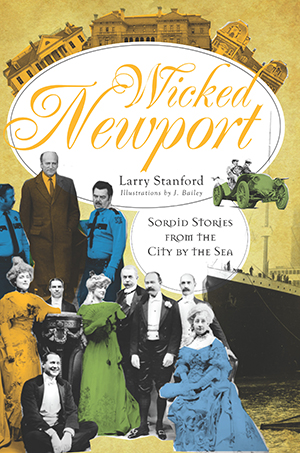 Wicked Newport: Sordid Stories from the City by the Sea By Larry Stanford, Illustrations by J. Bailey
In 1876, James Van Alen, known as 'Jimmy', married Emily Astor (1854-1881). On first glance, this would seem a highly suitable match: Jimmy was the son of General James Henry Van Alen (1819-1886) who came from a politically prominent Knickerbocker family in Kinderhook, closely related to President Martin Van Buren. The General had raised and equipped his own cavalry regiment during the Civil War and afterwards became a multi-millionaire through a savvy investment of $300,000 in the Illinois Central Railroad.

However Emily's father, William Backhouse Astor Jr. (1829-1892), cared neither for the pedigree nor the wealth of the Van Alens and viewed his daughter's suitor with nothing short of utter contempt. On hearing that the couple wished to be married, Astor was said to roar: "Damned if I want my family to have anything to do with the Van Alens"!

This reaction had so outraged Jimmy that he immediately challenged his would-be father-in-law to a duel! They had chosen their seconds and even agreed on a site before Astor finally buckled under the pretext that he saw, "no reason to waste his life on a Van Alen". Apologies were made, and the couple were married: Now wouldn't you have wanted to have been around for that father of the bride's speech?!

To Distract a Grief-Stricken Mind

Five years later, Mrs Emily Van Alen died giving birth to their third child and left behind her an inconsolable husband. In order to distract the grief-stricken mind of his only son, General Van Alen generously divided his land at The Grange on Ochre Point and gave half of it to his son with the money to start a building project of his choosing. The General died in 1886 and The Grange was knocked down to make room for Jimmy's garage.

Jimmy Van Alen, like his father, was an out-and-out Anglophile. He was known for sporting a monocle and being fond of not only using English expressions, but had a habit of peppering his conversation with various quotes from Shakespeare... and, we begin to see why the gruff and notoriously unamused William Astor, was, to be frank, unamused!

During his time at Oxford University, Jimmy made many friends among the English aristocracy and he and his wife had spent as much time in England as they had in America. It is perhaps then of little surprise that Jimmy wished to bring a part of England to Newport when it came to building a house of his own design.

In 1883, he'd stayed as a guest at Wakehurst Place in Sussex, during which time he was said to have purchased the original 16th century architectural plans. Travelling to London, he entrusted the idea of replicating the Tudor mansion to his close friend, Charles Eamer Kempe (1837-1907), who though better known for stained-glass windows also happened to be an expert on Tudor architecture. Kempe drew up the plans, while construction of the house that started in 1884 was the responsibility of local architect Dudley Newton.

Covered by a roof of Vermont slate unique in America, externally the 'E' plan mansion is an exact copy of its English counterpart. Surrounded by a high wall, the mansion of sand-colored Indiana limestone was approached through wrought iron gates on Ochre Point and up via the carriage house at the foot of the drive.

The gardens at Wakehurst were designed and laid out by Ernest Bowditch, a student of Frederick Law Olmsted (1822-1903), the architect of New York's Central Park. Bowditch even threw in a flock of sheep to give the grounds a rural English feel!

It was Wakehurst that introduced the concept of "museum rooms" to America: the state rooms on the ground floor came directly from English houses that had been recently demolished. These rooms - complete with tapestries and antiques - had been put together in England before being shipped to, and then reconstructed, in Newport. Ever the traditionalist and in keeping with the antique ambience, Van Alen chose against installing electricity as he might otherwise have done and kept all the rooms gas-lit.

The entrance hall - known as the Long Gallery - was built to blend with the replica Jacobean staircase that faced the front door. To the left, the hall led to the Belgian Dining Room, imported from a Renaissance house in Bruges, and in which can still be seen the 16th century Spanish leather panels on its walls and ceilings.

Adjacent to the Dining Room is the Library, designed for a London townhouse in the 1780s by the most famous of the all neo-classical architects, Robert Adam; it is certainly the first, and possibly the only complete Adam room to have been shipped to America and contains a sofa said to have belonged to Napoleon, or it may have come from the home of chateau built by Napoleon's brother in New Jersey, Point Breeze. On the other side of the hall stood the Drawing Room, the largest room in the house - complete with an Italian fireplace and a chandelier of 136 candles - that later became the ballroom and was filled with the portraits of Van Alen's illustrious ancestors.

Unusually for most mansions, Wakehurst did not have an Art Gallery. This was not to say that Van Alen lacked artwork, or a taste for it, quite the contrary. Instead, he chose to spread his collection throughout the different rooms. His favorite room was the Dutch Renaissance Smoking Room, taken from the London residence of a former mistress (Maria Anne Fitzherbert) of the Prince of Wales.

At a cost of $750,000, Wakehurst was finished in 1888 and christened with a grand ball - one of the many parties to be held there. In her memoirs, Lady Beresford recalled,

The household at "Wakehurst" ran on oiled wheels; its hospitality was famous, for James Van Alen was a connoisseur of good food and good wines. His musicales were wonderful, for although he knew nothing of music he acted on his usual principle, engaged the greatest artists, paid the highest fees.

On one occasion Jimmy boldly took the decision not to invite two of the biggest society names to one such musicale: "Very sorry, my dear (he explained to Mrs Fish), upon my word, very sorry, but I can't have you and Harry Lehr at this party of mine. You make too much noise...!" At this, Mrs Fish threatened to spread a rumor that their cook had a smallpox and she'd then invite all society to the musicale she would now hold. A compromise was agreed upon: "the disturbing elements" would be allowed to dinner at Wakehurst, but they had to promise to stay out on the terrace for the music!

Jimmy adored Wakehurst, but when Prohibition sank its blunt jaws into Gilded Age America that was enough for him to leave the country altogether! In 1920, he upped-and-offed to the vacation home he had leased in England since 1907, Rushton Hall in Northamptonshire. Like at Wakehurst, Van Alen had also - at great expense - furnished it with hundreds of Elizabethan antiques. At Rushton, he indulged his passions for deer hunting and entertaining grand English aristocrats in even grander style! He wintered on the French Riviera at Cannes and occasionally went back to the States, but always longed for the day he could return to Wakehurst and enjoy the parties as they had been.

Last of the Gilded Ages Hostesses

Jimmy Van Alen died in 1923, ten years before Prohibition was lifted. He left Wakehurst along with a fortune of $26 million to his only son, James L. Van Alen (1878-1927), confusingly also nicknamed "Jimmy". The younger Van Alen - father of the man who invented the tie-break system in the modern game of tennis - died just four years later, and Wakehurst, along with $10 million, now came to his widow, Margaret Louise Post (1876-1969). Known as "Daisy," she was described as "a somewhat menacing dowager" who eleven years later also inherited the Vanderbilt Mansion, Hyde Park.

After her husband's death, she had sold their city mansion in New York and took up permanent residence at Wakehurst where she employed a staff of 37 at a cost of some $100,000 a year. Her domestic staff included a butler, 4 footmen (in black and gold liveried uniforms), the housekeeper, 10 maids, one chef, 2 assistant chefs, 4 under chefs, a scullery maid, chauffeur, a valet for her son and lady's maids for herself and her daughter. The remaining staff worked in the gardens. Her chef was paid $10,000 a year, which made him one of the most highly paid of his profession in Newport.

Daisy was known as the last of the great Gilded Age hostesses, proclaiming in the 1950s that, "Wakehurst is the last home in Newport to be properly run". To give an idea of what she viewed as 'proper,' breakfast for her guests was not toast and coffee. Guests received a full hunt-breakfast (ie., for those about to spend all day in a saddle) served on a 36-piece gold set, even though there was no hunt and by then not even a horse to ride!

On her death in 1969, Daisy left Wakehurst to her three children. Her daughter, Louise Astor Van Alen (1910-1998), gave up her share when she moved to Paris, as did her eldest son, James Henry Van Alen II (1902-1991), who preferred to make his home at Avalon in Newport. Her second son, William Laurens Van Alen (1907-2003), took sole ownership of the estate. He reduced the staff to nine and quietly sold off much of the art collection and several plots of land to meet rising taxes.

Eventually, in 1972 William sold Wakehurst to Salve Regina University for $200,000, moving with his entourage of staff to his preferred base in Newport, Seafair, which was considerably cheaper to run. The grand old mansion was eased of its contents and became a library before serving as it does today as the Student Center and home to the University's Departments of English Cultural and Historic Preservation. In 2001, Wakehurst became part of "Save America's Treasures" instigated by the National Trust for Historic Preservation. Its counterpart in England was featured in the film As You Like It (2006) which would have pleased the Shakespeare-loving Van Alen!

John Jacob Astor: America's First Multimillionaire (2002) by Axel Madsen; Wakehurst Then & Now (2009) by Katie Wildgrube in the Mosaic: Salve Regina's Student Voice; Genealogical History of the Van Alen History; Gilded: How Newport Became America's Richest Resort (2009) by Deborah Davis; Wakehurst: thegildedage.blogspot.co.uk; Newport Through Its Architecture: A History of Styles from Postmedieval to Postmodern (2005) by James L. Yarnall; The Bonus of Laughter (2012), by Alan Pryce-Jones; King Lear (2005) by Elizabeth Beresford; Images from the Library of Congress