Completed in 1565, for Thomas (Hawkins) Fisher (1516-1577) M.P., for Warwick and Receiver of Revenues for Warwickshire, Leicestershire, and Coventry. Located in the heart of Shakespeare country, The Priory was sold to the Puckering family who sold it to Henry Wise, Superintendent of the Royal Gardens at Hampton Court. In 1865, the Wise family it sold to the Lloyds banking family but by 1925 it had been abandoned when they offered its materials for sale before demolition. An American diplomat, Alexander W. Weddell paid £3,500 for the old house and dismantling it had it partially rebuilt in the States as Virginia House which can still be seen today. Its remaining 28.7-acres of parkland today constitute Warwick's Priory Park....
zoom_in 4 images 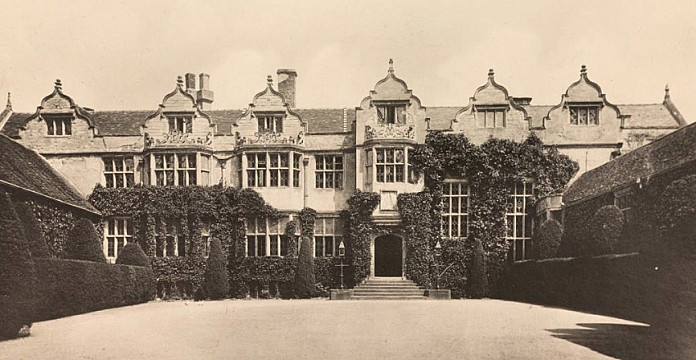 The house stood on what had been a monastery (completed in 1119) founded by the 1st Earl of Warwick and dedicated to St. Sepulchre. After the Dissolution of the Monasteries from 1539, opportunistic men like Fisher were quick to buy up the newly available land.

Although named Hawkins, Thomas was referred to as "Fisher" (the surname his family adopted) as his father was the local fishmonger at Warwick's Market Cross. He entered the service of John Dudley (afterwards Earl of Warwick and then Duke of Northumberland) and then became secretary to the Duke of Somerset, Protector of England. He bought the Priory in 1546 and through various sinecures his fortune was sufficient by 1565 to have knocked down the monastery and built this house in its place, naming it "Hawkin's Nest" or  "Hawk's Nest" due in part to its situation within, "a pleasant grove of elms".

The house originally formed a perfect square and the curvilinear Dutch Gables were added to the front north facade (seen in the picture) circa 1620. The south (garden-facing) facade was rebuilt circa 1745 by the Wise family. The west side of the house occupies the place on which the monastery's chapel once stood and it is supposed to have been partly built with stone from its walls. Integrated into the west facade was the remains of a large, "richly carved" stone baptismal font, believed to have once sat in the original chapel.

Towards the end of his life, Fisher had accrued estates that gave him an income of £3,000 a year, making him Warwick's wealthiest untitled citizen. In 1571, the Earl of Leicester - Queen Elizabeth's favorite courtier - spent several days at The Priory. A year later, several days after dining with Fisher's son, the Queen surprised the household when she arrived here unannounced, joining Mrs Fisher and the Earl and Countess of Warwick for dinner. After the meal, the Queen visited, "the good man of the house (Fisher), who, at that time, was grievously vexed with the gout". Despite his affliction, the following day he attended the monarch on her return to Kenilworth, riding in company with William Cecil, Lord Burghley. One month later another distinguished guest, the Marquis of Northampton (brother of King Henry VIII's sixth and final wife, Catherine Parr) died while staying here.

"A Youth of Very Dissipated Habits"

Fisher died in 1577 and left all his estates to his son, Edward (b.1547), "a youth of very dissipated habits". If Fisher had hoped to be the progenitor of a great landed family, that dream evaporated just five short years after he was laid to rest. Having already squandered his fortune in 1582, Edward sold The Priory to Sir John Puckering (d.1596), Lord Keeper of the Great Seal, but "whom he endeavoured to cheat by a fraudulent conveyance". Edward was tried in the Star Chamber and ended his days a debtor in the Fleet Prison.

The Priory had remained in the Puckering family until 1693 when it was described as, "a melancholy old seat". It passed from the last Puckering to his wife's niece, Lady Jane Bowyer, who kept "a fine collection" of pictures and portraits in the gallery here.

Although a half-interest in The Priory had been acquired by Henry Wise (1663-1738) in 1709 he did not take full possession until Lady Bowyer died in 1727. In that year, Wise retired here having been Royal Gardener to William III, Queen Anne, and George I, and Superintendent of the Royal Gardens at Hampton Court. Among his notable guests who stayed here was the great Venetian artist, Canaletto. When Wise died he was worth £200,000 which was a far greater fortune than many of his distinguished clientele.

The south facade was rebuilt circa 1745 by Wise's son in the fashionable style of that period. It remained the principal seat of the Wise family until 1809 when the Rev. Henry Wise (1776-1827), offered the furniture for sale, billed as, "the property of a gentleman leaving his country residence". He moved his family into the nearby Manor of Offchurch Bury and although the house stood empty he opened the Priory's parkland to the public.

In 1816, the house was described as follows: "The Garden Front (south facade), erected about 70-years since, presents the appearance of a handsome modern mansion; and, from its windows commands a delightful prospect over the surrounding country. In the interior, the ancient part still retains all the marks of its former grandeur, and the modern consists of a numerous suite of handsome and commodious rooms. The Hall, in particular, is large and beautiful, with a lofty ceiling, formed in plaster work. The number of distinct apartments, throughout this extensive pile, amounts, in while, to nearly one hundred".

The gardens were also described in 1816 as, "pleasure ground immediately adjoining the mansion are tastefully laid out, in the form a spacious lawn, with one principal walk carried around it. At a small distance, is a large kitchen garden, encompassed with high walls, planted with choice fruit trees, and furnished with hot houses and green houses. Surrounding the whole, is the extensive Park, consisting of nearly seventy-acres... interspersed with several large pieces of water... through this park are several foot paths left open to the public (with) some of the most rural and delightful walks".

It didn't remain empty for long and by 1822 The Priory was home to Samuel Ryland (1764-1843), formerly of the Laurels near Birmingham, whose family fortune was made in the wire-drawing industry. The Rylands remained here until it became evident that a railway would be run through the estate and they decamped to Barford. Sure enough, by 1840 the Reverend Wise's son sold off a strip of the parkland to the Great Western Railway Company and the new line was opened in 1852. The house had by then come into the possession of William Scott (a cousin of the Rylands) who sold it to Thomas Lloyd.

Banked by the Lloyds

Thomas Lloyd (1814-1890) was a director of the family-owned Lloyds Bank and retired to The Priory from Birmingham in 1865. He is chiefly remembered in Warwick as a philanthropist in the true old-fashioned sense of the word, taking a particular interest in the asylum, gaol, and the local schools. Today, he is commemorated by "The Thomas Lloyd" pub on Warwick's Market Place. He died in 1890 when The Priory passed to his only surviving child, Jane (1848-1899), who was married to her cousin Sampson Lloyd (1846-1899). In 1893, The Priory was described as containing, "a lofty hall lighted by tall windows, a handsome oak-panelled dining room, and an old oak staircase".

Sampson and Jane lived between here and Dolobran in Montgomeryshire - the Lloyd family's ancestral estate first occupied by them in 1486. In 1899, both estates were conveyed to their eldest surviving son, Thomas Owen Lloyd (1873-1960), who initially divided his time between them before settling at Dolobran. In 1904, he leased The Priory to the notable Anglo-American Robert Griswold Emmet who lived here with his family while he built the Elizabethan-style Moreton Paddox next to Moreton Hall. No doubt Lloyd was slightly disappointed that Emmet did not wish to buy his authentic Elizabethan home and after the Emmets moved out in 1910 Lloyd placed it on the market for £21,250.

By 1925, having sat empty and fallen into a bad state of repair, Lloyd decided to demolish The Priory before holding a “Highly Important Unreserved Demolition Sale”. Incorporating all The Priory's materials, it offered for auction, “rare old oak doors, large quantity of floor boards and the whole of the joists and other timbers and enormous quantities of excellent brick, sandstone, old oak and other beams, timbers and girders”.

A Bumpy Start to a New Life in the New World

Days before the auction was to be held, an American diplomat named Alexander W. Weddell paid £3,500 for the house as it stood. His intention was to dismantle it and then rebuild it for his wife in his native Virginia, which - incredulously - was apparently a far worse crime than breaking it up piecemeal and demolishing what was left. Nonetheless the news caused outrage and a Member of Parliament went as far as to brand the sale an “act of vandalism”! But, once tempers had calmed down and the dust had settled, sense prevailed, and another Member of Parliament wrote to Mr Weddell: “Had you not stepped in and bought the materials of the partially demolished structure, they would have been lost for all time, whereas now they will be utilised in the erection of a new building.”

Once work had started on dismantling the house there were concerns that the stone would simply disintegrate on being dislodged. Having removed the interiors, experts advised setting off a small explosion in the center of the house that allowed most of the masonry to be shipped in tact to the States. The 350-year old stones were then loaded onto three ships - all of which promptly sank before making it out of the harbor due to their weight! Having dredged them back up to the surface they were once again reloaded and this time made it safely to Virginia. However, still damp from their dip in the sea, they needed to be dried out for a further six months before work could start on Virginia House....

In Search of a Kingdom: Francis Drake, Elizabeth I, and the Perilous Birth of the British Empire By Laurence Bergreen

Tudors: The History of England from Henry VIII to Elizabeth I By Peter Ackroyd