Completed in 1929, for Alexander W. Weddell (1876-1948) and his wife Virginia Chase (1874-1948). Situated on a hillside overlooking the James River, it's built with materials salvaged from Warwick Priory, a 16th Century manor in Shakespeare's England. Virginia House is made up of three distinct sections, each one a part reproduction of three houses of the same age and from the same region in England: the section with the pair of Dutch gables on the front facade is a part reproduction of Warwick Priory; the east wing with the open entrance through to the gardens is modelled on the Gatehouse at Wormleighton Manor; and the west wing, notably the west-facing facade, is modelled on the Washington family's ancestral home, Sulgrave Manor....
zoom_in 20 images 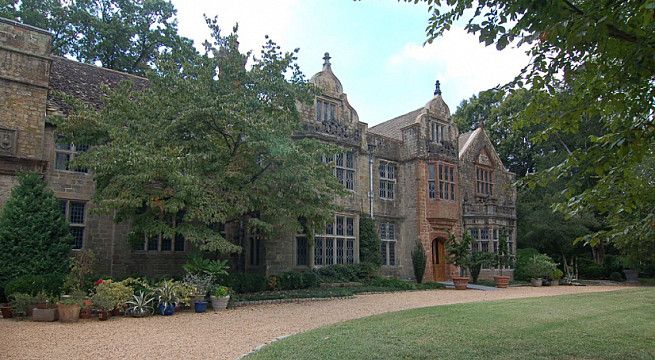 Alexander Weddell was born in Richmond, Virginia. He took great pride in his Virginian ancestry which dated back to the early settlement of the colony and he invariably wore the rosetta of the Society of Cincinnati on his lapel. He retired to his native state in 1928 having served as a Foreign Service Officer in Greece, Mexico, Italy, India, Egypt, Syria, and Zanzibar. He and his wife were married in 1923 having met while she was touring the Far East and he was Consul-General at Calcutta. While on leave from Mexico in 1925 they toured England, during which time they stayed as the guests of fellow Americans Robert and Louise Emmet in Warwickshire. The Emmets were married in Virginia but had lived at Warwick Priory while they were building their own Elizabethan-style manor nearby.

Virginia Weddell was the widow of Lt.-Commander James Harrison Steedman U.S.N., grandson of the President of the American Iron Mountain Company, then one of the largest producers of iron in the world. Steedman and his brothers co-owned the Curtis Manufacturing Co., a foundry and machine factory that made a fortune during WWI through lucrative contracts with the British and American governments. Being childless, after Steedman died Mrs Weddell came into sole possession of his million dollar fortune.

When the Weddells first set eyes on Warwick Priory it had been left empty since the Emmets closed the door on it fifteen years earlier. Already badly dilapidated, an auction was due to go ahead in a matter of days to sell off its composite materials before razing what was left. Horrified by the thought of such an architectural loss, the Weddells handed the owner a check for £3,500 with a plan to have the whole thing dismantled, shipped back to America and rebuilt in Virginia - a project that cost them an additional $251,968.

Setting Sail for the New World

Once work had started on dismantling the house there were concerns that the stone would simply disintegrate on being dislodged. Having removed the interiors, experts advised setting off a small explosion in the center of the house that allowed most of the masonry to be shipped in tact to the States. The 350-year old stones were then loaded onto three ships - all of which promptly sank before making it out of the harbor due to their weight! Having dredged their cargo back up to the surface, this time everything arrived safely in Virginia in early 1926. However, still damp from their dip in the English sea, the stones needed to be dried out for a further 6-months before any work could take place.

For the Love of Virginia

Being childless, the Weddells weren't looking to build a family home. They were passionate about history and from the moment of its inception they intended Virginia House - named for Weddell's beloved wife, Virginia - to be a monument, museum space, and headquarters for the Virginia Historical Society. They chose an American architect - Henry Grant Morse - to oversee the whole project precisely because of his experience in designing public spaces, and his aptitude for the Tudor-Revival. The west wing was built to house a museum while the ground floor reception rooms were of a suitable size and laid out in such a way as to easily accommodate large numbers of guests for entertaining and exhibitions. On completion in 1929, they duly deeded the house to the Society while maintaining life tenancy for themselves, living in their private quarters on the first floor.

Before leaving England, the Weddells and their architect made two further, very specific stops in the vicinity: 21-miles south of Warwick lies Wormleighton Manor; and, 9-miles south of Wormleighton is found Sulgrave Manor. The latter is best known as the ancestral home of the Washington family, but the Gatehouse at Wormleighton is also relevant to the history of the United States. It was built by Robert, 1st Lord Spencer, who was a close friend of the Washingtons. One of Spencer's sons married Mary Sandys, the cousin of the President's great-grandfather, John Washington, with whom he grew up and to whose family he owed his introduction to the tobacco trade that took him to Virginia.

The Weddells didn't simply return to the States with some old building materials, they also brought detailed plans of two historic houses intimately linked to the history of Virginia. Utilizing all three elements, as authentically as possible they were able to resurrect a house that more than any other represented the founding history of the States.

While the stones, joists, and windows from Warwick Priory built the shell of Virginia House, sadly most of its interior features (panelling, fireplaces, plaster work etc.) had already been stripped out and sold before the Weddells took possession. As such, they hired Charles Duveen - "probably one of the most competent authorities on Elizabethan furniture and house decoration in (the United States) and in Europe" to track down and buy back as many of its original features that he could lay his hands on.

While Duveen had mixed success, he hit a home run when he found not only the original 17th century staircase in a house in London, but it was still with its surrounding oak panelling that dated back to the 12th Century having been retrofitted into the Priory from the monastery that predated it. The staircase and panelling now define the Great Hall at Virginia House which is the room you first come into on entering from the front door.

Other rooms of particular note here include the "Sulgrave Room" which although used as a bedroom is an exact replica of the hall room at Sulgrave Manor. Its mantel over the fireplace and the screen that divides the room from the gallery are made from oak salvaged from Warwick Priory and were specifically carved by artisans near Sulgrave. Similarly, the mantelpiece in the Weddell's private library on the first floor is also crafted from Priory oak and is inscribed: "O ye fyre and heate, bless ye the Lord". Hidden within the library panelling is a door that opens onto a secret passageway to Weddell's study - added at his request. The Dining Room panelling came from the Manor of the Priory in Redbourn, Hertfordshire, but the panelling in the Drawing Room - which Mrs Weddell teasingly referred to as "the Withdrawing Room" in its full connotation - is not as old as it may appear, but it is from Warwickshire and the armorial oak fireplace is dated 1561.

The east wall of the west wing bears mason's marks from various periods, some of which date to the 12th Century. Just beyond it on the south facade is the loggia designed by William Lawrence Bottomley. It incorporates columns imported from Spain while the painted ceiling dates back to the 16th Century and was once part of Knole in Kent.

Souvenirs from a Lifetime of Foreign Service

Almost all of the art and furnishings on display - including the 10,000-books in the library - were collected by the Weddells while they lived and traveled abroad. Although he retired in 1928, the fact that Weddell with all his diplomatic experience was now not only married, but married to a charming and intelligent millionaire, suddenly made him - and of course his wife - a very attractive proposition for a plum Ambassadorial posting. In 1933, his friend and political ally, Franklin D. Roosevelt, managed to persuade him to leave Virginia House for Argentina where he served as Ambassador until the outbreak of war in 1939. From there, he took up residence at the Palacio de Montellano where he fulfilled his final role as Ambassador to Spain before retiring permanently to Virginia in 1942.

The collection they accrued during their travels was as varied as it was impressive. But perhaps even more masterful was their ability to blend their Tudor-Jacobean residence so seamlessly with a rich and exotic mix of 15th, 16th and 17th Century English, Spanish, Ottoman, and Latin American furniture; English, French, American, Mexican, and Ottoman silver; English Jacobean and Spanish Baroque portraiture; Himalayan bronzes and carved figurines; Gothic and Renaissance sculptures; Brussels and Mortlake tapestries; antique silks, carpets etc. In this cultured and refined atmosphere, Alexander authored three historical books relating to Virginia (not including a history of Virginia House itself) and one on Argentina while Mrs Weddell studied textiles, adding to her collection of English and Spanish embroideries, French and Italian silks and velvets, and ecclesiastical vestments all of which she used to furnish their home and upholster their antiques.

"A Sudden and Appalling End"
On New Year's Day, 1948, the Weddells accompanied by their maid were on a train bound for Arizona where they intended to pass the winter. Having drawn to a halt in a thick blizzard, their Pullman train carriage was struck by another train at full speed. All three of them were killed instantly. The American Antiquarian Society to whom Mr Weddell had been elected as a Member just three months before called it, "a sudden and appalling end to an honorable life". As per their express desire, Virginia House passed into the full possession of the Virginia Historical Society who ever since have returned their gratitude by faithfully maintaining their home and their collection as a house museum.

Alexander Weddell's private life away from international politics was defined by his devotion to Virginia his wife, and Virginia his state. He received numerous honors during his career and ended it as a U.S. Ambassador, but to his friends he confided that his greatest honor came when he was elected President of the Virginia Historical Society.

Journey on the James: Three Weeks through the Heart of Virginia By Earl Swift

The Tudor Home By Kevin Murphy

America in the World: A History of U.S. Diplomacy and Foreign Policy By Robert B. Zoellick