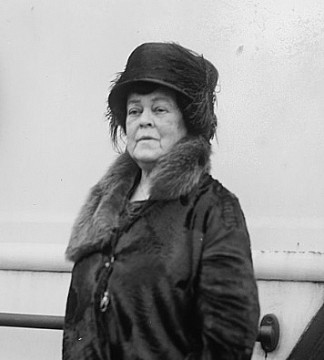 Born in Mobile, Alabama. Her father was initially a successful cotton merchant; her mother was a niece of Joseph Desha, Governor of Kentucky; and, she was named for her great-grandmother's uncle, James Erskine, Lord Alva. She was brought up in New York aside from four years in Paris. On one hand, Alva was the haughty, high-handed society hostess of New York's Gilded Age, but she also almost single-handedly pioneered women's rights in America. In 1909, she established the Political Equality League to get votes for suffrage-supporting New York State politicians before joining the National American Woman Suffrage Association. She was President of the New York Division, leading them at the Women's Votes Parade in 1912. In 1916, she co-founded the National Woman's Party and the following year organized the first picketing ever to take place at The White House. She was elected President of the National Woman's Party, an office she held to her death. She also had a penchant for expensive houses, notably chateaux, and was elected the first female member of the American Institute of Architects.

In her memoirs, Winston Churchill's private secretary said Alva was the only person she had ever seen intimidate her employer: "this formidable female adversary proved too much for him"! On "Equal Pay Day" (April 12, 2016), Alva was honored as President Barack Obama established the Belmont-Paul Women's Equality National Monument. She was married twice; controversially divorced once; and, was mother to three children.

Consuelo and Alva Vanderbilt: The Story of a Mother and a Daughter in the Gilded Age By Amanda Mackenzie Stuart