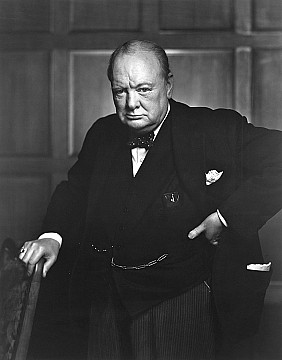 Born at Blenheim Palace, he was educated at Harrow School and (on his third attempt at entry) the Royal Military Academy, Sandhurst. He became a Lieutenant in the 4th Queen's Own Hussars. He travelled to Cuba to witness the War of Independence and to New York to familiarize himself with his American roots/family. He went with the Hussars to India ("a godless land of snobs and bores") and attached himself to Lord Kitchener's campaign in Egypt, after which he gave skin from his chest for another soldier's skin graft. Quitting the army for politics, on failing to win a seat and having anticipated the Boer War, he took himself to South Africa as a war journalist. Captured and imprisoned as a POW, he escaped and eventually got back to British lines.

He narrowly won his first seat in Parliament as a Conservative but defected to the Liberals in 1904. In World War One, he resigned from politics to fight on the Western Front; rejoined government to organize the Gallipoli Campaign (1917); resigned again for its failure and took himself back to the Western Front before being re-appointed by Prime Minister Lloyd-George. In 1924, he switched back to the Conservatives and became Chancellor of the Exchequer. He was elected Prime Minister in 1940 and from then until 1945 led the allies to Victory over Hitler's Germany. He enjoyed a strong working partnership with U.S. President Franklin D. Roosevelt, which has been called, “the partnership that saved the west,” restricting Stalin's/Russia's post-war reach into Europe. Churchill was elected Prime Minister for a second term between 1951 and 1955.

He was a prolific writer and authored 43-books in 72-volumes plus speeches, articles, papers, etc. He was awarded the Nobel Prize for Literature in 1953. In 1908, he married his beloved Clementine. They were the parents of one son and four daughters. They lived between their London townhouse at 28 Hyde Park Gate and their country home in Kent, Chartwell, where he spent most of his time after retiring from politics in 1955.

The Splendid and the Vile: A Saga of Churchill, Family, and Defiance During the Blitz By Erik Larson

Speaking for Themselves : The Personal Letters of Winston and Clementine Churchill By Edited by their daughter, Mary Soames