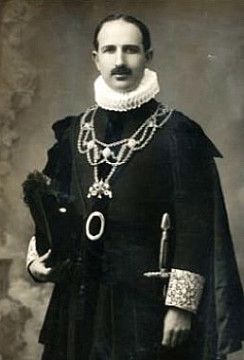 He was born in New York City but after his father retired from business his family lived for the most part at the magnificent L'Hotel Blumenthal in Paris. He was Jewish by birth, but was brought up as an Episcopalian before his mother had him converted to Catholicism - and changed his surname to 'Blunt' - on the occasion of her second marriage to the Duc de Montmorency. In 1919, Cecil married Anna Laetitia Pecci and as a wedding present from Pope Benedict XV (in memory of Anna's great-uncle, Pope Leo XIII) Cecil was made a Count - although as an American citizen in theory he was not allowed to use the title. He and Anna double-barrelled their surnames and lived at the L'Hotel Cassini in Paris where they entertained writers, poets, artists, and musicians including Salvador Dalí, Cocteau, Paul Valéry, Francis Poulenc, Claudel etc.
From 1929, the Pecci-Blunts began to divide their time between Paris and Rome, first buying the Piazza Aracoeli 3 and then Palazzo Ruspoli-Malatesta. They also kept the Villa Reale of Marlia near Lucca in Tuscany and during the war lived at 9 East 84th Street off Fifth Avenue in New York. Like in Paris, they always surrounded themselves with the leading names in art, stage and literature. Sometime after the war at Lillywhites Department Store in London, Cecil met and fell in love with a younger man, Cecil Everley, a former footman to the 7th Earl of Beauchamp who was publicly disgraced in 1931 when outed as a homosexual. Cecil now divided his time between his wife and their five children and Cecil, for whom he bought houses in California and Cap d’Ail in the South of France. His long-suffering wife now became referred to as “La Reine des Deux Ceciles”!

Patrons of the Arts