Completed in 1771, for the Marquis de Cassini (1715-1790) and his wife, Angélique-Dorothée Babaud (1737-1805). Their U-shaped mansion on a 18,126 square foot footprint was designed by Claude Billard de Bélisard (architect to one of the Marquise's lovers, Prince Louis V de Bourbon-Condé) but the mansard roof and dome on the garden facade (seen below) were added in 1863 when it was home to the Comtesse de Talleyrand-Périgord, giving it a radical Louis XVI makeover. On the opposite side, the courtyard facade has influenced two American mansions both designed by Horace Trumbauer, Miramar and Rose Terrace, and in 1919 it was bought and restored by a native New Yorker. Cecil Blunt became Count Pecci-Blunt when he married the grand-niece of Pope Léon XIII and the house became known as L'Hôtel Pecci-Blunt....
zoom_in 8 images 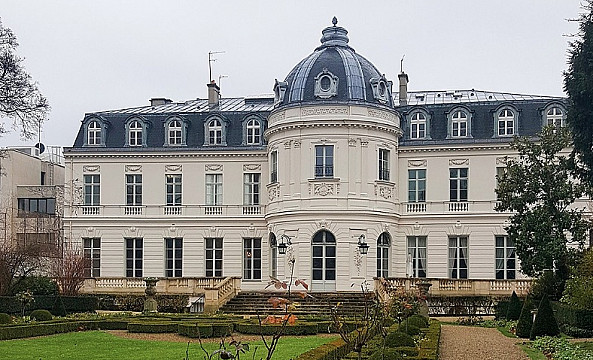 The Marquis de Cassini came from a distinguished family of astronomers and was the grandson of the founder of the Observatory in Paris. However, his career followed a military route and he retired with the rank of Maréchal de Camp before entering politics and serving in the Senate. His wife - in what must be assumed was a fairly liberal relationship - was mistress to both Prince Louis V de Bourbon-Condé (whose architect designed her home) and the Marquis de Maillebois, Maréchal de France. In 1794, the Marquise was forced to relinquish possession to the de Landrieffe family as her husband had borrowed money from them to buy the land, but had failed to pay them back.

In 1805, it was sold to General François Auguste de Caffarelli du Falga, a former aide-de-camp to Napoleon and Governor of the Palais des Tuileries. After twenty years (1825), he sold up to the Baron de La Rochefoucauld and it remained in his family until 1841 when they sold to the department store tycoon, Hector Bouruet-Aubertot, founder of "Au Gagne Petit". Shortly before his death, he sold to the Comtesse (Suzanne Le Peletier de Mortefontaine) de Talleyrand-Périgord (1811-1895), wife of Ernest de Talleyrand-Périgord.

By the time Suzanne purchased the house, it was in a poor state of repair. Employing the architect Jean-Jacques Arveuf-Fransquin, they transformed it into how it appears today. Their old home, L'Hôtel de Monville, had been demolished to make way for a new boulevard and they incorporated many of its features into their new home, notably part of the decoration in the Grand Salon. They mixed in the highest circles of the aristocracy and their new home quickly became a magnet for French high society. The Countess died in 1895 and bequeathed her home to their daughter, Marguerite,  widow of Prince de Ligne.

During World War I, the house was sold to the religious order "Les Pères du T.S. Sacrement" from Quebec. Once peace was restored, they sold it on to the Secrétariat-Général of the government who had taken the opportunity to buy up many of buildings surrounding Le Jardin (Garden) de Matignon. But in 1922, it returned to private hands.

The new owners were Cecil and Mimi Pecci-Blunt. Born Cecil Blumenthal in New York, towards the end of his teenage years he grew up at L'Hôtel Blumenthal-Montmorency on Avenue Foch in Paris. On marrying his eccentric wife, Mimi Pecci, his parents gifted them the house and she being a grand-niece of Pope Leon XIII, Pope Benedict XV made Cecil a Count. The Supreme Court of New York allowed him to anglicize his surname to "Blunt" and after their marriage they combined their names to become the Pecci-Blunts.

While keeping its 18th century grandeur, they pulled it into the 20th century by installing central heating, elevators, and eight new bathrooms. Another contemporary touch was getting Jean-Michel Frank to design the Art-Deco library. To restore the acre of gardens, they employed Jacques-Henri-Auguste Gréber who is perhaps best known for the gardens at two of America's most famous houses, Lynnewood Hall and Whitemarsh Hall.

Blunt's millions provided a fitting backdrop for Mimi to display her lineage: Laszlo's portrait of her great-uncle, Pope Leo XIII, hung in the Grand Salon which was centered by a rug emblazoned with his coat-of-arms that came from the throne room at the Vatican. Similarly, the house was large and grand enough to house the magnificent art collection collated by Cecil's father, the most part of which he inherited in 1927.

If the Talleyrand-Perogords had held court here as leaders of French aristocratic society, the Pecci-Blunts held court as leaders of the literary and artistic elite, regularly entertaining the likes of Salvador Dalí, Cocteau, Paul Valéry, Francis Poulenc, Claudel etc., not only here but in the palazzos in Italy too. In 1924, they gave a ball here for several hundred guests - among them Consuelo, Duchess of Marlborough - during which Diaghilev’s Ballets Russes performed Cimarosiana and Les Sylphides on a stage in the gardens and a programme for the entertainments was designed by Marie Laurencin.
During the war, the Pecci-Blunts retreated to the safety of New York. Once peace was restored they returned to Europe and soon afterwards Cecil began to share his life between his wife and his boyfriend, Cecil Everley, and Mimi now became known as “La Reine des Deux Ceciles”! Nonetheless she remained one of the most important members of the artistic scene in Europe and was one of the 12-members of the "Zodiac" that supported Salvador Dalí. By this time, Mimi began to spend more time at their palazzo in Rome and with Cecil spending more time with the other Cecil, they sold up in 1948.

From 1948, it served as a home for members of the Catholic Church visiting Paris. Then in 1976, it was acquired by the government's "Direction Générale de l'Administration et de la Fonction Publique (the DGAFP), who continue to occupy the mansion today.

How to Read Paris: A Crash Course in Parisian Architecture By Chris Rogers

Curiosities of Paris: An Idiosyncratic Guide to Overlooked Delights... Hidden in Plain Sight By Dominique Lesbros