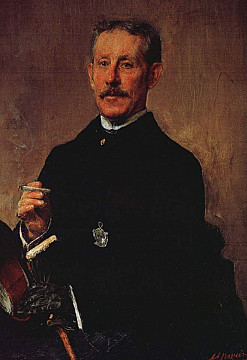 He was born in Boston and graduated in law from Harvard University in 1849. He took two years to travel through Europe before returning to Boston where he joined his father in the banking business. He eventually succeeded his father as manager and agent of the merchant banking firms of Brown, Shipley & Co., of London and Liverpool, and Brown Bros. & Co., of New York and Boston. He was a trustee of the Boston Public Library and a director of the Boston National Bank. In his private life, he was a writer of some talent and co-authored two books with his wife: Doctor Mondschein and The Spirit of Seventy-Six. He enjoyed, "a wide reputation as a brilliant wit and raconteur. He was always a great reader and a master of historical and artistic literature".

In 1869, Curtis was embroiled in an unusual set of circumstances that saw him spend two months in jail and some say was the catalyst for his leaving America for good in 1877, though scholars say that is unlikely. He was taking a train when one Judge Churchill and the Judge's female companion irked Curtis by taking a seat he was keeping for someone else. Tempers escalated over their bulky luggage and Curtis snapped when the Judge declared him to be no gentleman. At this, Curtis, "twisted Churchill's nose and struck him in the eye, breaking his glasses". He was charged with assault and although a petition on his behalf was drawn up by 300 of Boston's most prominent names, he refused to sign it, just as he also refused Churchill's offer to drop the charges if he would only apologize. Content that he had taken the right course of action, Curtis was jailed!

In 1853, at Newport, he married Ariana Randolph Wormeley and they were the parents of two sons, including the artist, Ralph. In Boston, they lived at 74 Mount Vernon Street; 214 Beacon Street; and, at Chestnut Hill, and Newport, Rhode Island. On leaving Boston in 1877 to tour Europe and India with his wife, he leased and then in 1885 purchased the Palazzo Barbaro in Venice which became a magnet for cultured American society. They  also kept a winter apartment in Rome. He died in London, staying with his younger son.