Situated on the Grand Canal, it is comprised of two distinct halves and is one of Venice's least altered and therefore most original palazzos. Looking at the picture, on the left is the larger, original palazzo built in 1425 with two loggias of four-pointed arches. In 1465, it became the home of Zaccaria Barbaro (1422-1492), Procurator of St Mark's and brother of the Bishop of Verona. The Barbaros owed their fortune and influence to their success in the salt trade. In 1694, Antonio Gaspari, then one of the city's most renowned architects, built a two-story Baroque house to its right as a separate home for the Tagliapietra family. In about 1700, they leased it - and later sold it - to the Barbaros who were still living next door and allowed them to re-employ Gaspari to add a further two-stories in which to house their magnificent new Baroque ballroom....
zoom_in 6 images 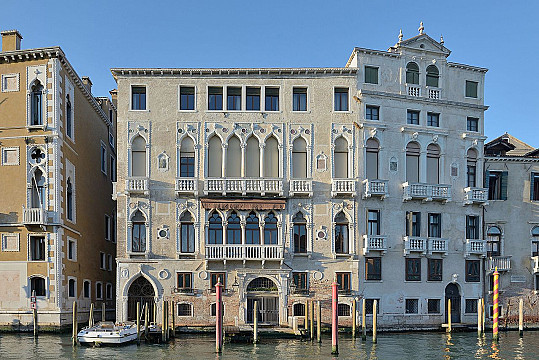 By the 1850s, the Barbaro family - or at least their wealth - had died out and the Palazzo was acquired by a series of speculators who sold off much of the furniture and artwork. It was rescued by a wealthy pair of Bostonians, Daniel Sargent Curtis (nephew of the celebrated sculptor Horatio Greenough of Boston and Florence) and his wife, Ariana Randolph Wormeley, who had emigrated permanently to Europe in 1878. They leased the first floor of the palazzo from 1881 and bought it outright in 1885 for $13,500. At that time it was very run down, before the Curtis' lovingly restored it to its original splendor.

The Curtis Family & the Barbaro Set

Their home immediately became a magnet for artists, writers, and cultured Americans. Frequent guests became known as "The Barbaro Set" and perhaps most notable among them was the author Henry James. He finished The Aspern Papers at a desk still on display and slept in the library on a bed specially made up for him. He considered the ballroom the finest example of a Venetian Baroque interior and under the pseudonym "Palazzo Leporelli," described it in one of his best known novels, The Wings of The Dove.

Their son, Ralph Wormeley Curtis, was a close friend of the artist John Singer Sargent who painted the Curtis family in the ballroom in 1899. Sargent teasingly referred to Mrs Curtis as "the Dogaressa" (similar to "the Duchess") and intended to give his picture to her as a gift, but she turned it down: she thought he made her look too old and disapproved of her son's louche stance. Today it's displayed at the Royal Academy of Arts.

Other members of the Set included: Edith Wharton; Bernard Berenson; Claude Monet; Robert Browning; James Abbott McNeill Whistler; Charles Eliot Norton; William Merritt Chase; and, Isabella Gardner Stewart who rented it for the summer of 1892 and had her portrait painted here by Anders Zorn. Having a house full of guests, it was she who placed the extra bed in the library for Henry James. He so admired gazing up at its exquisite ceiling that he felt compelled to write a letter to Mrs Curtis: "Have you ever lived here? If you haven’t, if you haven’t gazed upward from your couch, in the rosy dawn, or during the postprandial (that is after-luncheon) siesta, at the medallions and arabesques of the ceiling, permit me to say that you don’t know the Barbaro".

Having been recently structurally restored, it is still owned and very much cared for by the Curtis' great-grandchildren today. It has featured in upwards of a dozen different films and perhaps more recognisably in the TV series Brideshead Revisited (1981), as the home of Lord Marchmain and his mistress, as well as in the film adaptation of Henry James' Wings of The Dove (1997). The library as used by James remains untouched.

Letters from the Palazzo Barbaro (Pushkin Collection) By Henry James