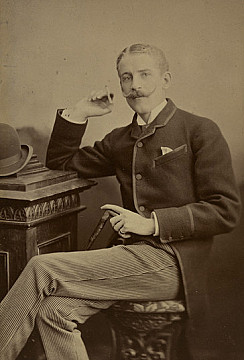 He was born at Boston, Massachusetts. He studied law at Harvard where he was a member of Hasty Pudding Club and co-founded "The Harvard Lampoon". On graduating, he persuaded his parents to allow him to study art at the Académie Julian in Paris. Remaining in France, he was taken on as a student of Carolus-Duran where he met and became close friends with John Singer Sargent. He opened a studio in Paris and from 1878 his parents moved to Italy, purchasing the Palazzo Barbaro in Venice which became a magnet for cultured American society. There, Curtis met Whistler, who like Sargent became both a close friend while also influencing his style.

In 1880, he and Sargent visited the Netherlands to copy the works of Frans Hals, mixing with the art colony at Scheveningen. From 1881 to 1893, he regularly exhibited at the Salon in Paris and received an Honorable Mention at the Exposition Universelle in 1889. His art was also shown in England at the Royal Academy of Arts, the Grosvenor Gallery (both in London) and the Manchester Art Gallery. In 1897, he married Lisa DeWolf Colt, widow of the architect Arthur Rotch. They were the parents of three children. After the birth of their first child, they moved to Villa Sylvia on Cap-Ferrat where they both died.