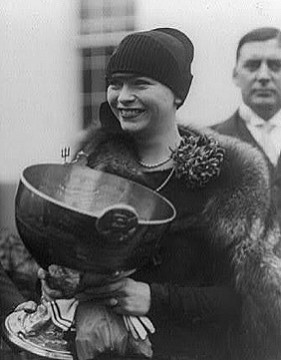 She was born in Detroit, one of the two children of the co-founder of the Dodge Motor Company. After her father died in 1920, six years later her mother cashed in her shares in the family business in return for $73 million. She and her brother, Horace Jr., were passionate about speed-boating and in 1927 she became the first woman to win the President’s Cup at the APBA Gold Cup boat race.

In 1920, she married Jame Cromwell whose mother and stepfather were just nearing the completion of Whitemarsh Hall. They were the parents of one daughter, Christine, before they divorced in 1928 and he married Doris Duke. That same year, she married Raymond T. Baker (formerly married to Maggie Vanderbilt), and to mark the occasion her mother built them Marly in Washington D.C. They had one daughter, Anna, but it was a tempestuous marriage that ended with Baker's death in 1935. That same year, at her brother's home, St. Leonard's, she married another banker, Timothy Godde, and they lived on his estate at Rye, New York. But, two years later she made headlines again for her affair with the Irish prize-fighter, Jack Doyle. On attempting to divorce Godde, he affected a reconciliation and she returned with him to Rye. Her fast lifestyle and excessive drinking eventually caught up with her and she died aged-44. Both her daughters were cut out of their grandmother's will for their irresponsible, spendthrift lifestyles.