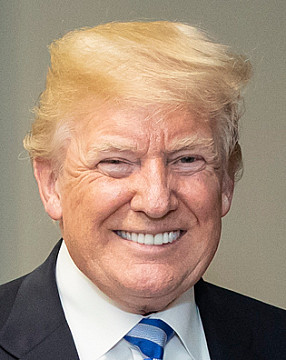 He was preceded in the Presidency by Barack Obama and defeated Hilary Clinton in the 2016 election. Choosing Mike Pense as his Vice-President, he served one term in office for the Republicans before losing the 2020 election to Joe Biden.

Donald John Trump was born and raised in Queens, New York. From the 1970s, Trump lived in Manhattan and bought Mar-a-Lago as a summer residence in 1985. To satisfy his creditors, in 1995 he re-organized Mar-a-Lago into a club and bought Seven Springs in New York with the intention of transforming it into a golf complex with, "the costliest membership ever envisioned" but was refused permission. Since 2019, he has made his apartment at Mar-a-Lago his permanent residence. He has married three times: (1) In 1977, he married Czech model Ivana Zelníčková by whom he has three children, Don Jr., Ivanka, and Eric. They divorced in 1992 (2) In 1993, he married actress Maria Ann Maples, and they have one daughter together, Tiffany. They divorced in 1999 (3) In 2005, he married Slovenian model Melania Knavs/Knauss, and they have one son, Barron.

The Beautiful Poetry of Donald Trump By Rob Sears