Completed in 1919, for Eugene Meyer (1875-1959) and his wife Agnes Ernst (1887-1970). Meyer was Chairman of the Federal Reserve, President of the World Bank Group, and owner of The Washington Post. Situated 38-miles north of New York City, the house was designed along the lines of a French chateau by Charles A. Platt and the estate includes "Nonesuch," a 7-bedroom home apparently built for the Heinz family and acquired by Meyer. During the 70s and 80s, Seven Springs was a conference center operated by Yale and then Rockefeller universities. It was acquired in 1995 by a debt-laden Donald Trump who needed to pay back his lenders and planned to convert it into a golf complex with, "the costliest membership ever envisioned". That plan failed after he lost a 9-year battle with locals, but he now has permission to develop 100-acres of the estate....
zoom_in 4 images 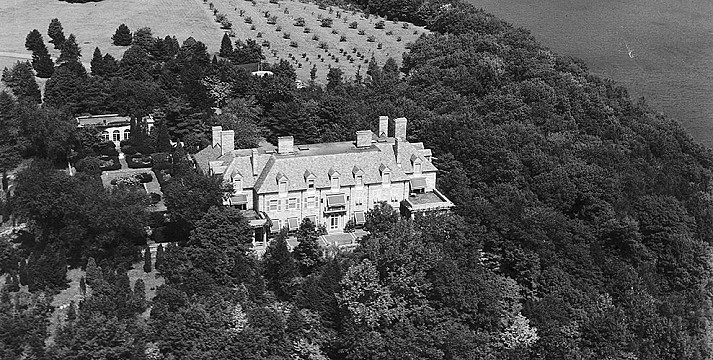 Chairman of the Federal Reserve & Owner of the Washington Post

In 1915, the Meyers bought a working farm near Bedford and over time expanded their holdings until they owned a 1,000-acre estate spread over three different towns: Bedford, North Castle, and New Castle. They summered in the 'rambling' farmhouse while their new 28,332-square foot, 14-bedroom home was being built. It was said to have been modelled on the chateaux they had admired in France and was rumored to have cost more than $2 million. The sandstone with which it was built as well as the slate for the roof were all quarried from the estate which includes 15-outbuildings set in rolling countryside.

"That monument to ill-gotten wealth filled with its unfathomable art..."

The forecourt is centered around an elaborate fountain and to one side of the mansion is the walled garden (which now encloses one of three pools) and an orangery that was built specifically for parties. Rooms of note include the indoor pool on the ground floor made entirely of Italian white marble and the 'viewing room' overlooking Byram Lake. In Carol Felsenthal's biography of the Meyer's daughter, Katharine Graham, she referred to Seven Springs as, "that monument to ill-gotten wealth filled with its unfathomable art".

Mrs Meyer died here in 1970 and in accordance with her will she left the estate (valued at $602,000) plus $5 million to Yale University to be used, "as a place of creative thinking about problems of intellectual and public significance". Yale gained possession in 1973 and as the "Seven Springs Farm Center" it became a conference center and place of study. By the end of the 1970s, the Meyer Foundation cut ties with Yale and acquired a permit from Mount Kisco that allowed it to be used as a non-profit conference center. Continuing in its same role, in 1984 the Foundation gifted Seven Springs to Rockefeller University.

Going for Golf and "the Costliest Membership Ever Envisioned"

Ten years later (1994), the university put it on the market for $9.75 million. The following year it was snapped up by a young Donald Trump whose real estate empire was then heavily in debt. To satisfy those debts, he was required to convert his Florida home, Mar-a-Lago, into a club and $7.5 million was then diverted for his acquisition of Seven Springs, in another attempt to raise funds. The idea was to transform the by-then 213-acre estate into a golf complex with "the costliest membership ever envisioned". A source close to the Trumps was quoted in The New York Times saying, "the highest entrance fee for a golf club was 'around $250,000, and this one is going to be substantially higher'".

Gadaffi, and Trumped by Local Residents

Local residents were already unhappy about Trump's plans to convert Seven Springs into another exclusive club and their ire was only further increased when in 2009 he rented a corner of the estate to the Libyan de facto ruler, Colonel Gaddafi, who erected his signature bedouin-style tent here. The western world regarded Gaddafi as a terrorist, an abuser of human rights, and just two years later (2011) the Libyans rebelled and he was found hiding in a drainage pipe before being killed by an angry mob of his own people.

In 2013, Trump lost a nine-year battle with the local community in Westchester and was refused permission to build his proposed 18-hole golf course. He did, however, receive approval to develop 100-acres of the property and Donald's son, Eric Trump, who proposed to his girlfriend here, was supposedly in charge of the project to build 12 luxury homes each with plots of circa 10-acres, but as of 2019, they remain unbuilt.

In 2019, the Financial Times noted that in 2012 Trump had valued Seven Springs at $291 million. That figure is particularly staggering when compared to the more realistic valuation made by Forbes in 2014 when they priced it at somewhere just under $19.5 million, “based on recent property sales and advice from local realtors and assessors”.
As of October, 2020, The Washington Post reported that New York's Attorney General, Letitia James, is leading an investigation into the Trump Organization as to whether it improperly overvalued Seven Springs in order to receive a $21.1 million tax break.

Sifting through the Ketchup

Judging by all current photos, the exterior of the main house appears to be entirely unaltered since it was built by the Meyers, but according to the Trump website, "the mansion is 50,000-square feet" which would imply it has almost doubled in size. In reference to the house called "Nonesuch," the Trump site states that, "H.J. Heinz of Heinz Ketchup, who was a friend of Meyer’s, built (the) Tudor-style home... also in 1919". H.J. Heinz of Heinz Ketchup was 31-years older than Meyer; no reference is made to Meyer or Nonesuch in the pre-eminent biography of Heinz by Quentin Skrabec; and, H.J. Heinz died in 1919. H.J. Heinz II lived between Ascot Place, Pittsburgh, Florida, and Manhattan.

The Architecture of Charles A. Platt By Royal Cortissoz. Introduction by Charles D. Warren. Foreword by Robert A.M. Stern

Power, Privilege and the Post: The Katharine Graham Story By Carol Felsenthal

Commander in Cheat: How Golf Explains Trump By Rick Reilly

The Room Where It Happened: A White House Memoir By John Bolton