Completed in 1927, for Marjorie Merriweather Post (1887-1973) and her then (second) husband, Edward Francis Hutton (1875-1962). The eclectically-designed Mar-a-Lago is generally seen as the most opulent mansion on Palm Beach, covering a supposed 62,500 square feet, probably placing it among the 100 largest houses in the States. Today, it is the Mar-a-Lago Club, established by Donald Trump in 1995 to stave off his creditors. Keeping an apartment here, he has given this address as his permanent residence since 2019, forfeiting his residency in New York. Forbes Magazine stated, "obviously, it’s a tax avoidance move" but the former President said “I’m smart” for paying no Federal income taxes. As concerns Mar-a-Lago, if you'd ever wondered why the Trump logo is banned from being used abroad, the answer lies herein....
zoom_in 11 images 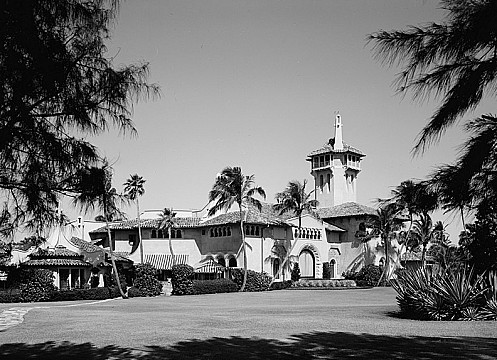 Marjorie Post was an astute businesswoman, a socialite, a philanthropist and an art collector. In 1914, she was the sole heiress to her father's empire, inheriting Post Foods that overnight made her the wealthiest woman in the United States with an estimated fortune of $250 million. She was married on four separate occasions but following her final divorce in 1964, she was known as Mrs Post for the remainder of her life.

Construction of her lavish 118-room winter home on Palm Beach started in 1924, taking three years to build at a final cost of $7 million. Deemed Hurricane-proof, the house is tightly fastened with concrete and steel to the coral reef beneath. Within its walls, were literally hundreds of priceless pieces of art and furnishings, many purchased during Mrs Post's time in Europe when her third husband was Ambassador to the Soviet Union.

The estate of 17.5 acres is connected directly to the beach via a private tunnel at one end, while running to the shores of Lake Worth at the other. The mansion's 75-foot tower offers panoramic views of both expanses of water, giving rise to its Spanish name that translates as "Sea-to-Lake". The apricot-colored stucco walls and rust-colored stone exterior of Mar-a-Lago was designed by the Austrian-American Joseph Urban (1872-1933), whereas the interior design was led by Marion Sims Wyeth (1889–1982).

Three hundred workers came over from Europe to build and sculpt Mar-a-Lago. Among the materials used were three boat-loads of Doria stone shipped over from Genoa in Italy; 20,000 salmon-pink roof tiles taken from old Cuban houses; native Cypress trees sand-blasted to give a weathered appearance to the beams and columns; 36,000 tiles from Spain, a great many of which dated from the 15th century collected by the Patron of the Arts, Louisine Havemeyer, wife of Henry O. Havemeyer; and, 2,200 square feet of black and white marble taken from a castle in Cuba to floor the dining room.

On completion in 1927, the 62,500 square foot mansion was among the 100 largest private homes, but was significantly behind the likes of Biltmore and The Breakers. But, whereas those mansions were designed by one of America's greatest architects (Richard Morris Hunt), Mrs Post took a different angle and consulted with Hollywood set-designers and the architect she brought over from Austria to create a unique blend to her own taste.

Mar-a-Lago's exterior is sometimes described as a "Disney-esque" combination of Hispanic, Moorish and Venetian architecture. The living room's 35-foot ceiling is lined with gold-leaf and is a larger version of a ceiling found in the Galleria dell'Accademia in Venice, Italy. Other styles within the mansion included Mrs Post's French Louis XVI bedroom and the Dutch Room. The 75-foot tower that dominates the property was partially inspired by the Palace at Palenque in Mexico and at the top it conceals the bedroom suite where Michael Jackson and Lisa Marie Presley honeymooned in 1994.
Incredibly, the 17.5 acres of land on which the estate stands set Mrs Post back a mere $100 when she purchased it in 1924. Back then, the grounds included statues of pheasants and parrots, fountains, a nine-hole golf course, outbuildings, and even bomb shelters. Yet, on at least one occasion, there was still room for the entire Ringling Brothers and Barnum & Bailey Circus to entertain guests after one of Mrs Post's renowned dinner parties!

The châtelaine of Mar-a-Lago was for the most time only resident with her youngest daughter, Dina Merrill, but the house still required a full-time staff of 60 - 30 to run the household and 30 to maintain the grounds. Prior to her death in 1973, Mrs Post offered the estate to her three daughters. But, despite a trust (Post Foundation) set up by her to maintain the mansion ($259,512 a year), they declined, still stating running costs.

Determined not to see her beloved home snatched up by property developers (an inevitability if it hit the open market), she attempted to interest the National Trust for Historic Preservation, and then Cecil Farris Bryant (1914-2002), 34th Governor of Florida. But, both politely declined - the running costs still remaining to be the sticking point.

Undeterred, Mrs Post then wielded her influence in Washington D.C. In 1972 (the year before she died), President Richard Nixon (1913-1994) authorized acceptance of the property should it be offered to the National Park Service. Congress concluded that, "while this property may not rank among the properties which have been recognized because of their antiquity, it is one whose values will grow in future generations".

Mrs Post had hoped that after her death Mar-a-Lago would serve both as a "Summer White House" and/or as a guesthouse for visiting dignitaries, in the tradition of Washington's Blair House. However, neither Nixon nor Carter had any interest in the place and government was undecided as to how they would make use of the property. It was designated a National Historic Landmark and added to the National Register of Historic Places in 1980, but following her death her house sat empty for the next 12 years.

The Art of the Steal

In the early 1980s, Donald Trump had tried and failed to buy and merge two apartments on Palm Beach as a vacation home for his family. Having become a white elephant, Mar-a-Lago had been on the market since 1981 when the government had unceremoniously handed it back to the Post Foundation. In fact, there had been so little interest in it (three sales had already fallen through) that the city had approved its demolition for re-development. It was at that point that it came on to Trump's radar and he offered the Post Foundation $15 million for the property, 25% under the asking price.

His offer was rejected. Following this rejection, Trump then paid $2 million to Jack C. Massey for the land between Mar-a-Lago and the ocean. Next, he put the news out that he intended to build a home there that would block Mar-Lago's sea view. The ploy, as intended, saw Mar-a-Lago's value plummet over night and in 1985 Trump was able to snap it up for a steal at just $7 million, which included $3 million for its furnishings.

Trump used the house as a vacation home but by the early 1990s he had steered the empire he inherited into serious debt. In an effort to placate his lenders (the banks), he promised to divide up Mar-a-Lago into smaller properties, but this plan was rejected by the city. So, in 1995 - the same year that he managed to find another $7.5 million to purchase Seven Springs - while maintaining a corner for himself, the city agreed that the mansion and its grounds could be converted into the fee-paying "Mar-a-Lago Club" and for that purpose a 20,000-square foot white, gold and mirrored ballroom was added.

In 2019, taking advantage of a lower state tax rate, Donald Trump announced that he was making his apartment at Mar-a-Lago his permanent address. In his first year as President in 2016, he came in at number 156 on the "Forbes 400" rich list with a net worth of $3.7 billion. His contribution that year towards the $3.5 trillion raised by 323-million Americans in federal income taxes to 'Make America Great' was... $750. In the weeks leading up to his defeat in the 2020 U.S. election, it was revealed that Trump had paid no federal income tax at all for 11 of the 18-years of tax returns examined.

Mrs Post's third husband, Joseph Davies (1876-1958) - to whom she was married from 1935 to 1955 - had his coat-of-arms and motto emblazoned in various places throughout Mar-a-Lago. When Trump had to open the mansion as a club, he kept the coats-of-arms but scrubbed out the Davies family motto that happened to be the word "Integrity" to replace it with "Trump" which he then proceeded to roll out as the logo for the Trump brand. The Davies family were not consulted and were far from impressed; and, in Britain he is banned by court order from using a coat-of arms that does not belong to him, which explains why the Trump brand, unlike other international brands, has two logos.

Palm Beach, Mar-a-Lago, and the Rise of America's Xanadu By Les Standiford

The Grifter's Club: Trump, Mar-a-Lago, and the Selling of the Presidency By Sarah Blaskey, Nicholas Nehamas, Caitlin Ostroff & Jay Weaver

Wicked Palm Beach: Lifestyles of the Rich and Heinous By Eliot Kleinberg

Madness Under the Royal Palms: Love and Death Behind the Gates of Palm Beach By Laurence Leamer

Mar-a-Lago: Inside the Gates of Power at Donald Trump's Presidential Palace By Laurence Leamer