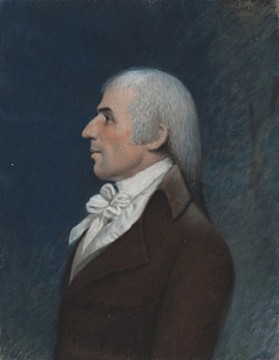 He was born in Philadelphia. He was educated at King's College, New York (Columbia) before spending five years in France, England and Scotland, graduating with his M.D. from the University of Edinburgh. He entered into practice with his father, Dr John Bard, at New York. During the Revolution the Bards were Loyalists and therefore kept a low profile, though ironically Samuel Bard is best remembered today for operating on - and saving the life of - George Washington (1732-1799) in his first term as President of the United States. He inherited his father's estate "Hyde Park" and built the first mansion on the estate precisely where the Vanderbilt Mansion stands today. A pioneering horticulturist, Samuel Bard quit his successful medical career in the city to move his family to his beloved Hyde Park where he became an innovative gentleman farmer. In 1799, he planted the Gingko tree on the south lawn as well as gardens, orchards and vineyards while experimenting with the cultivation of diverse European fruits in his greenhouses. He married his cousin and had eight children of whom four were lost in childhood to Scarlet Fever and only three reached adulthood: Mrs Susannah Johnston, William Bard, and Mrs Eliza McVickar.

The Caring Heirs of Doctor Samuel Bard By Peter Wortsman