Completed in 1898, for Frederick William Vanderbilt (1856-1938) and his wife (and first cousin) Louise Holmes Anthony Torrance (1844-1926). Traditionally known as "Hyde Park" this palatial 54-room mansion spread over 44,000 square feet is without question one of America's finest National Historic Sites. It is surrounded by 211-acres of equally stunning pleasure grounds, formal gardens and natural woodland; enjoying perhaps the best view in the area of the Hudson River and the Catskill Mountains beyond. It is among the Largest Houses in the United States, slightly larger than Boldt Castle, and fractionally smaller than Ochre Court....
zoom_in 20 images 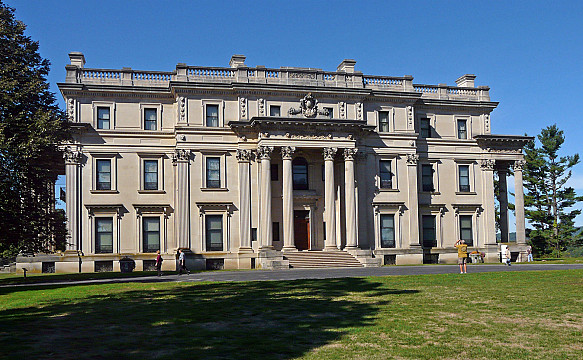 Pierre or Peter Fauconnier, Private Secretary to the Governor of New York

The history of the Hyde Park estate starts in 1705. That year, Pierre Fauconnier (1659-1746) was one of the four benefactors to a 10,000-acre land grant from Queen Anne of England. Fauconnier was then the private secretary to Edward Hyde (1671-1773), 3rd Earl of Clarendon; the Governor of New York and New Jersey with a penchant for cross-dressing, and it was in honor of his boss that Fauconnier named the estate "Hyde Park".

In 1741, Dr John Bard (1716-1799) married Fauconnier's grand-daughter, Suzanne Valleau (1721-1784). Following Fauconnier's death, Bard bought out his mother-in-law's share in Hyde Park and continued to acquire parcels of Fauconnier's patent until he owned its entirety some twenty years later, building "Red House" on the estate in 1772. Their son was the equally eminent physician, Dr. Samuel Bard (1742-1821), and though the Bard family were Loyalists who had kept a low profile during the Revolution, somewhat ironically they are best remembered today for operating on - and saving the life of - George Washington (1732-1799) during his first term as President of the United States.

Samuel inherited Hyde Park shortly before his father's death in 1799, building the first mansion on the estate precisely where the Vanderbilt Mansion stands today. A pioneering horticulturist, he quit his successful medical career in the city and moved his family to his beloved Hyde Park where he became an innovative gentleman farmer. In 1799, he planted the Gingko tree on the south lawn as well as gardens, orchards and vineyards while experimenting with the cultivation of diverse European fruits in his greenhouses.

On his death, he left the estate to his son, William Bard (1778-1853), who through land sales reduced the size of the estate to 540-acres. William, the third member of the Bard family to live at Hyde Park, was not as smitten with the estate as his predecessors and moved back to New York City with his family in 1828. He then sold the property to his father's former business partner, the equally estimable Dr David Hosack (1769-1835).

Dr Hosack purchased Hyde Park with financial assistance from his extremely wealthy third wife, the former Mrs Magdalena Coster. They already enjoyed the use of her country seat at Kip's Bay, the Coster Mansion, where her first husband had succeeded in creating, "one of the finest private gardens in America". But, wishing to continue the work of his former business partner, the Hosacks added Hyde Park to their portfolio.

Hosack wasted no time in calling upon the noted landscape gardener Andre Parmentier (1780-1830) to design and develop their new estate; laying out roads, paths and creating scenic vistas. As President of the New York Horticultural Society and the founder of the Elgin Botanic Garden (the first botanic garden in the United States), Hosack picked up where his former business partner had left off: many of the rare and exotic varieties of trees, shrubs and flowers seen today on the front lawn date from Hosack's tenure.

Hosack's Hyde Park became a popular haunt for noted painters and naturalists of the day, including the author Washington Irving (1783-1859). But sadly, Hosack did not live long to enjoy the fruits of his labors, dying in tragic circumstance just seven years later.
Despite having seven children and seven stepchildren, none wished to live here. In the year before she died (1840), Mrs Hosack subdivided the estate into smaller parcels for sale.

Colonel Langdon died at the newly built house in 1847. His widow had already developed a taste for life in Europe and despite her father gifting her The Langdon House, by 1852 Dorothea had left America for good. That year, she gave over the estate to her son Walter Langdon Jr. (1823-1894) and he set about enlarging the greenhouses and gardens; adding to the estate's land holdings by acquiring the adjoining farmland east of the Albany Post Road in 1872. His wife, Catherine Livingston (1830-1883), had predeceased him and as they left no children his heirs put the mansion and its 600-acre estate up for sale in 1895.

In 1895, Hyde Park was purchased from the Langdons by Frederick William Vanderbilt (1856-1938) and his wife Louise Holmes Anthony Torrance (1844-1926), whose father grew up at St. Antoine Hall in Montreal. Vanderbilt was a keen horticulturalist and the couple were immediately attracted to the beauty of the estate, but their decision to buy there was certainly influenced by their friends Ogden Mills (1855-1929) and his wife Ruth Livingston (1855-1920), who lived at the nearby Mills Mansion at Staatsburgh.

Hiring the famed firm of McKim, Mead & White, the Vanderbilt's tore down the tired old Langdon house and at a cost of $660,000 (the antique furnishings and decoration cost more than double that amount) and replaced it with the mansion seen there today. On its completion three years later, The New York Times hailed the Vanderbilt Mansion to be "the finest place on the Hudson between New York and Albany".

The house is designed in the beaux-arts style and built with Indiana limestone, giving it a distinctive sandy pink hue. The house has huge Greek ionic porticos on each of it's four sides. The oval reception hall - that features a large fireplace imported from a European palace - centers the reception rooms with views of the Hudson, including the 30 by 50 foot drawing room. The second floor is accessed by the Grand Stair Hall, leading up to the grand landing and the bedrooms. Mrs Vanderbilt's suite of a bedroom, dressing room and bathroom was designed by Ogden Codman. On the third floor are five further guest rooms, separated from the servant's hall and their quarters.

The house had its own hydroelectric power plant specifically for its own central heating system and the electricity. Aside from the house itself, there an array of impressive and equally beautiful outbuildings. The year round staff of sixty who were needed to maintain the house and the estate were virtually all local residents.

Hyde Park was one of five mansions owned by the Vanderbilts (including Rough Point), but it was the only one where Vanderbilt could indulge his passion for horticulture. He laid out the many levelled Italian Gardens in 1903 (recently restored by the F. W. Vanderbilt Garden Association) and the rose gardens with over 2,000 different rose bushes; even when not there (they used the house only during the spring and the fall), he kept in continual touch with the head gardener to discuss what need planting and pruning; and when. After Mrs Vanderbilt's sudden death in 1926, Mr Vanderbilt became a virtual recluse; living with the servants on the third floor of the mansion until his death in 1938.

With no children to inherit the estate, Vanderbilt left Hyde Park and $10 million to his wife's niece, Daisy Post (1876-1969), then the widow of James Laurens Van Alen (1878-1927). Daisy was one of the last great hostesses of the Gilded Age and the last chatelaine of Wakehurst in Newport, Rhode Island. Having no need for Hyde Park, she put it on the market, but in the midst of the depression, there were no takers.

Franklin Delano Roosevelt (1882-1945) was born and lived his whole life at nearby Springwood; and as a fourteen year old boy, he had witnessed the demolition of the old Langdon house to make way for the Vanderbilt Mansion. His passion for the area and the estate was such that while serving as President of the Untied States, rather than see Hyde Park partitioned and demolished, in 1940 he arranged for Congress to purchase the mansion and 211-acres of parkland to be put under the care of the National Park Service, as it has remained ever since.

Great Houses of the Hudson River By Michael Dwyer

American Eden: David Hosack, Botany, and Medicine in the Garden of the Early Republic By Victoria Johnson