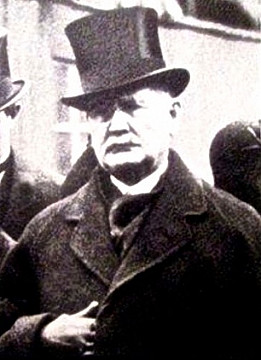 He was born in New Canaan, Connecticut. He studied at Phillips Academy, Andover, in Massachusetts and the universities of Munich and Heidelberg in Germany. In 1880, he returned to New York and entered the liquor industry. After marrying his wife, he became associated with the firm of Paris, Allen & Co., the New York distributors of "Old Crow" for the firm of W.A. Gaines & Co., whiskey distillers, of Frankfort, Kentucky. In 1887, he succeeded his wife's stepfather (Marshall J. Allen) who was then President of the W.A. Gaines & Co. He held the exclusive rights for "Old Crow" and "Old Hermitage" which made him a national figure as they became two of the most popular brands of Bourbon in the States. Under him, Gaines & Co., became the largest producers of sour mash whiskey in the world and are now part of Jim Bean. He was for many years President of the "Whiskey Trust" the organizaton of distillers formed to control the country's liquor supply. In private life, he was an avid collector of antiques, notably paintings, tapestries, musical instruments, and Chinese porcelain.

He kept a mansion at 154 East 70th Street in New York City. In 1890, he built "Garnwill" in Tuxedo Park and in 1915 he built a 300-foot long bungalow on Wellesley Island called "Arcadia". In 1907, he rebuilt a house on Dupont Circle in Washington D.C. that became known as Aladdin's Palace. By coming to the capital he had hoped to stave off Prohibition but when it was passed in 1922 he quit Washington for Newport where he built Seaview Terrace. His fortunes continued to steadily diminish and in 1927, he sold off part of his art collection at the American Galleries in New York for $155,000. In 1929 he bought "Silver Maples" at Roslyn on Long Island and the following year he bought a 20-room apartment in River House between 52nd and 53rd Street. In 1931, he sold "Garnwill" followed by his townhouse on 70th Street. In the year that he died (1935), he had been planning to sell his collection of Chinese Porcelain in London.

Bourbon Empire: The Past and Future of America's Whiskey By Reid Mitenbuler