Built from 1876, for William Matthew Galt (1834-1889) and his wife Harriet Turner (1836-1921). Their home of four years was an elegant mansion which was drastically remodelled in stages. They sold up to the founder of the National Geographic Society who left the house to his daughter, Mabel, and her celebrated husband, Alexander Graham Bell - inventor of the telephone. The Bells maintained this as their winter home until 1907 when it was acquired by Edson Bradley, a whisky baron who made millions predominantly through the "Old Crow" label to which he owned the exclusive rights. Doubled in size (as seen in the picture below) and given an interior that was "sumptuous beyond belief" before being filled with antiques that rivalled the collection of J.P. Morgan, it was dubbed, "Aladdin's Palace". In 1925, Bradley had the interior entirely dismantled and then re-assembled within Seaview Terrace, leaving an empty husk....
zoom_in 20 images 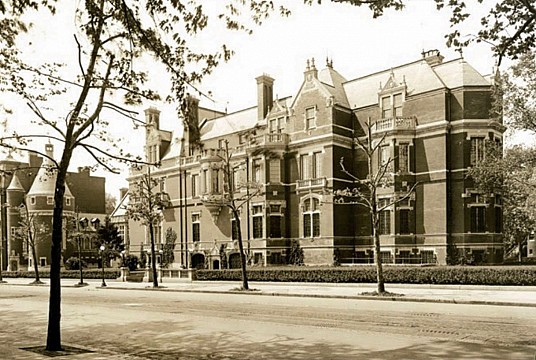 Alexander Graham Bell, Inventor of the Telephone & Co-Founder of AT&T

Galt was a flour merchant and a first cousin of the founders of Galt & Bro., Jewellers, that until 2011 was Washington's oldest and most prestigious jewellery store. Galt built his mansion at 1328 Connecticut Avenue on a triangular plot of land on the south side of DuPont Circle by 19th Street. It was the second mansion to be put up on the Circle, the first being Stewart's Castle, and on its completion the Washington Star described it as, "not only one of the finest residences in the city, but one of the pleasantest homes".

The Galts gained a reputation for the lavish parties they held here, but after just four years they sold it to Gardiner G. Hubbard and his wife Gertrude Mercer McCurdy (1827-1909). Hubbard was the founder of the National Geographic Society and also the Bell Telephone Company which he helped to finance for his famous son-in-law, Alexander Graham Bell. Mrs Hubbard was the sister of Richard Aldrich McCurdy, President of Mutual Life Insurance Company of New York. On purchasing the house in 1880, the Hubbards remodelled and expanded it, giving it a more austere facelift.

After Hubbard's death in 1897, his widow was joined at their home by their daughter to whom the mansion had been left, Mabel Gardiner Hubbard (1857-1923), and her famous husband, Alexander Graham Bell (1847-1922), the inventor of the telephone.

In March, 1907, the Bells sold the mansion for $166,500 to the whiskey magnate, Edson Bradley Jr., and his wife Julia Williams, who initially divided their time between here and their home on New York's Fifth Avenue. Bradley initially wanted to pull the exiting house down and start again, but when he discovered that zoning regulations would have only allowed him to build a smaller house, he scrapped that plan. He brought in Howard Greenley (1874-1963), an architect from New York, who doubled the size of the existing mansion and gave it a 16th century English Jacobean/French Renaissance makeover - English within and French without - upon which Bradley lavished a further $100,000.

Enlarged to 40-rooms and reaching up to 60-feet on a footprint of 16,650-square feet, the house covered more than half a city block and was divided into two distinct halves by a driveway: the northern half of the house contained the servants quarters and kitchens; and, the southern half was for the family and included a library, ballroom, and an oratory (private chapel) filled with Spanish-Gothic antiques and religious artefacts.

Mrs Bradley was a noted - and insatiable - collector of Chinese Porcelain, and there was a profusion of display cabinets throughout the house. Complementing her collection, there were rare works of art, objets d'art, ceramics, 16th century tapestries, Oriental hangings, and one of the largest pipe organs in the country. The principal rooms were panelled in rich, carved woods and the moulded plaster ceilings more often than not had started their lives in old English castles (such as the dining room) and French châteaux. Their antiques were said to have rivalled the collection of J.P. Morgan (1837-1913) in New York.

It was the final addition in 1911 that led to the mansion being referred to by the local press as "Aladdin's Palace". The Bradleys had long enjoyed holding private performances in their living room given by the leading musical and theatrical personages of the day. But, by 1911, their collection of antiques had left the house somewhat crowded and they decided to build a new living room on the southern end of the mansion.

What they simply referred to as 'the living room' (for in their eyes it was just that) was a 90-foot wide and 120-foot long extension that at 3-stories in height was as tall as the house itself. Copied - not taken - from a room in an old English castle, it was panelled in walnut and trimmed with oak. The lower walls were covered in exquisite antique bookshelves housing volumes of rare books and in the center of one of the walls was a large open fireplace. However, with relatively little effort, this living room could be cleared of its furniture and transformed into a theater or used as a second ballroom.

For the purpose of hosting private theatricals, the room had a stage - a feature not uncommon in the grandest drawing rooms in 18th century Europe. It was comparatively small and when in use it was fringed with potted palms behind which those 'off stage' could make themselves 'invisible' to the audience. Rumors abound that the room seated 500, but by all contemporary accounts it sat 200, albeit more than comfortably. Private theaters in the States were not common, but the Bradley's was certainly far from being the first, eg. the Jerome Mansion built in 1865 had one that sat 600 in New York. The Bradleys used theirs not only to entertain their friends, but also for holding charity events and as such it had its own entrance via a private driveway off 19th Street.

The Bradleys entertained here in style. When Mrs Bradley threw a party she would hire private trains to bring their friends from New York. She is most famous for hosting what was duubbed the "American Beauty Ball" when she used so many roses to decorate the house that the city was entirely devoid of roses until several days later. It is also rumored that it was the Bradleys who hosted the city's first private jazz party.

Stripped Out for Seaview

The Bradleys had come to Washington with the sole aim of staving off Prohibition. Having failed when it became law in 1920, they sold their showpiece home the following year for roughly $700,000 to Andrew W. Mellon, of Pittsburgh, who was the newly appointed Secretary to the Treasury. In the January 22, 1922, edition of the Washington Post, the mansion's interior was featured in a rare collection of photographs.

In 1922, the Bradleys bought an estate in Newport and by 1923 work was underway on Seaview Terrace. By 1925, Bradley seems to have bought back his old home on Dupont Circle and once again brought Howard Greenley back to Washington, this time for the sole purpose of stripping out all the principal rooms (for more on their architecture, see the halfpuddinghalfsource blog) in order to have them re-fitted at Newport. Even though the house was now just a shell, it still managed to fetch $300,000 when it was sold to Joseph J. Moebs in 1926. The iconic Dupont Circle Building now stands in its place.

Alexander Graham Bell: The Life and Times of the Man Who Invented the Telephone By Edwin S. Grosvenor & Morgan Wesson

Reluctant Genius: Alexander Graham Bell and the Passion for Invention By Charlotte Gray