Elwood B. Hosmer, "The Grey Ghost of the Ritz" of Montreal 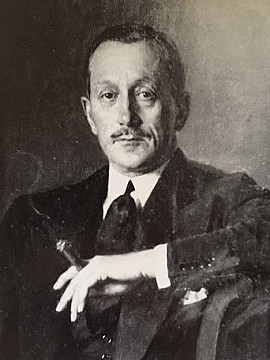 He was born at Montreal and for a period lived in Paris where in 1925 he married the American Mildred Burrill Adams who was some twenty years his junior. They were divorced after just two years, without children. That same year (1927), Elwood financed (and took part in) the first attempted east-west transatlantic flight of the Dornier-Napier Flying Boat "Whale". The crew of four consisted of Elwood with Captain Frank Courtney, Hugh Gilmour and Fred Pierce. Their first attempt in 1927 saw them take off from England but they were delayed due to various mishaps. On their second attempt in 1928, they planned to fly from Lisbon in Portugal to Newfoundland by way of the Azores. They got as far as the Azores before crashing and were adrift at sea for twelve hours before being rescued by the S.S. Minnewaska and brought to New York.

He had succeeded his father as a director of the Ritz-Carleton Hotel, Montreal, and it was here that he passed much of his time, often with the French portraitist Alphonse Jongers who had made the Ritz his home from 1924. Elwood was soon dubbed, "The Grey Ghost of the Ritz". After his chauffeur dropped him off at the hotel, he would park himself in the large armchair to the left of the fireplace in the Palm Court. There, he would pass his gin-addled afternoons doing crosswords at the end of a Corona Coronas cigar. But, God forbid anyone who lingered near too long or had too much fun: on one occasion he summoned a waiter to loudly remonstrate, “how long are these wretched women going to stay?”!

When his father died, Elwood inherited some $10 million. He added to his father's collection of 16th Century art so that he became a serious collector in his own right, possessed also of "an outstanding collection of 18th century English portraits and 19th century French paintings". In 1933, he was appointed to the Board of Trustees of the National Gallery of Canada. Elwood died in Montreal in the mansion built by his father, the Charles R. Hosmer House. Having no children, his sister Olive, was his sole heir.

Image Courtesy of the Montreal Star Archives in the Public Archives of Canada; E.B. Hosmer, Figure in Ill-Fated Flight, Obituary in The New York Times, October 26, 1946.