Completed in 1902, for Charles R. Hosmer (1851-1927) and his wife, Clara Bigelow (1852-1926). Hosmer was the popular, self-made man with the Midas touch who became a personal friend of the great hotelier César Ritz (1850-1918) and co-founded the Ritz-Carleton Hotel in Montreal. Combining North American brownstone opulence with the Beaux-Arts style learned in Paris by the architect's brother, the exterior of this house is unique in Montreal. Within, it was noted for its 16th century collection of Renaissance art. The mansion remained in the Hosmer family until 1969 when it was sold to McGill University and is now its School of Physical & Occupational Therapy....
zoom_in 20 images 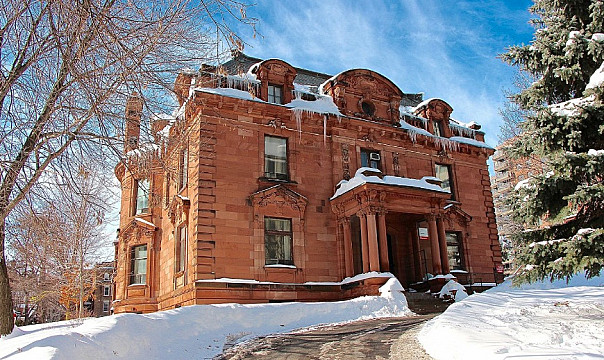 Elwood B. Hosmer, "The Grey Ghost of the Ritz" of Montreal

Charles Hosmer was born to American parents in "an obscure hamlet" on the St. Lawrence River between Montreal and the American border. He started work aged 12, sweeping the floors of the Grand Trunk Railway office. Two years later, having used the opportunity to teach himself telegraphy, he quit school and became their telegraph operator. This was the catalyst that saw him become President of Dominion Telegraph and Manager of the Canadian Pacific Railway's telegraphs by the age of 30. Before retiring, he'd led the movement to establish the Ritz-Carleton Hotel in Montreal and was a director of 26 companies while being President of Canadian Cottons and the Ogilvie Flour Mills. His popularity, work ethic and business acumen gained him a fortune of $20 million.

From late 1899, Hosmer purchased two parcels of land on the slopes of Mount Royal and commissioned Edward Maxwell to build what would later be regarded as, "the most magnificent of (his) grand city mansions". Built of fine red sandstone shipped over from the Moat Quarries in Cumberland, England, it was completed by the end of 1902, occupying some 35,600 square feet with 13 bedrooms, 7 of which were for live-in staff.

At that time, the Beaux-Arts style was then at the cutting-edge of fashion in Paris, London and New York. Maxwell's brother, William, was also eager to impart his recently gained knowledge imbibed from L’École des Beaux-Arts in Paris. He had trained under the great Professor Jean-Louis Pascal who himself had worked under Charles Garnier for three years during the construction of the Palais Garnier. The brownstone exterior of the Hosmer House is enlivened by a variety of Baroque cartouches, palmettes, festoons and consoles which are found in abundance on Garnier's Parisian masterpiece. But inside, each of the principal rooms on the ground floor followed their own style:

From Rococo to Renaissance

To the left of the main entrance is the Green Louis XVI Rococo reception room. Its walls were hung with green silk; the furniture was upholstered with designs from Gobelin's tapestries; and, the ceiling and panels were painted by Frederick W. Hutchison (1871-1953) R.C.A., who studied at the Académie Julian in Paris and the Chase School in New York City. The reception room gives on to the Louis XV Drawing Room of rose silk, a color inspired by the lady in the portrait above the fireplace painted by Sir Joshua Reynolds.

Both the Reception and Drawing rooms featured a series of small light bulbs that were concealed within the ceiling's central cornicing. This then quite novel technique accentuated the ceiling detail while bathing the rooms below in a soft, unobtrusive light.

Opposite the curved, south-facing windows, the Drawing Room opens onto the Baroque-inspired hallway and Grand Staircase. The wood used is darkened American oak clad with hand-forged, roughly polished iron. The Dutch stained glass windows at the foot of the first flight of stairs are "exquisite in quality". To the right of the staircase is the 16th century Renaissance Library, elaborately carved in dark rosewood inlaid with gold leaf set against rich silks and velvets and dominated by the green Connemara marble fireplace.

On the other side of the Staircase was the French Gothic Dining Room with low-level, carved mahogany panelling above which the walls were lined with a blue, handwoven tapestry by the leading figure in the Arts & Craft movement, William Morris (1834-1896). Roughly 39 stained glass windows and door panes were later removed from the house and retrofitted into McGill's School of Architecture. The panes are a mixture of Flemish, Dutch, French, German, Swiss and Italian, some dating back to the late 16th century.

The second floor contained six bedrooms for family (the Hosmers had two children) and guests, as well as three bathrooms. Mr and Mrs Hosmer slept in separate suites, each with their own dressing room and bathroom. Mrs Hosmer's suite of four rooms also included a boudoir (sitting room). The basement contained 15 rooms given over to the day-to-day running of the household. It is evident that the man who started his career sweeping floors took care to look after his staff: Rooms in the basement included a communal servants hall, a butler's room, a sewing room, and two bathrooms. Aside from the two servants bedrooms in the basement, there were five more in the attic with another bathroom at a time when even one indoor bathroom was considered a luxury.

It is widely believed that Hosmer's appointment in 1880 to undertake the monumental task of managing the Canadian Pacific Railway's telegraph network was due to Sir William C. Van Horne recognizing a kindred spirit: he was an American who also quit school at 14 to work in the telegraph office of the Illinois Central Railroad. Van Horne later made a name for himself as a respected connoisseur and collector of art and Hosmer followed a similar trajectory, instilling the same passion into both of his children.

Neither of Charles' children bore their own. But, just as they had been taught to appreciate art by their father, they took their cousin's wife, Mrs Lucile (Fairbank) Pillow (1883-1969), under their wing. She in turn became an authority, and ultimately the owner of the Hosmer Collection which had been added to significantly by Elwood and Olive. On her death, she left the lion's share of the Collection to her only daughter, Marguerite, who married A. Murray Vaughan. Vaughan was President of the Montreal Museum of Fine Arts at the time of Olive's death and administered both the Hosmer and Pillow estates.

The original collection focused on Renaissance art from the 16th Century, but over the years it came to include a variety of pieces from the 17th, 18th and 19th centuries. Some of the more notable pieces included a tableau by Constable; four Canalettos depicting Venice in 1725; "Lady MacBeth Sleepwalking" by Eugene Delacroix; and, a haul of other paintings by the likes of Pieter Brueghel the Younger (1564-1638), Jan Breughel II (1601-1678), Francois-Hubert Drouais, Eugene Boudin, Joshua Reynolds, James Wilson Morrice etc., etc. The Collection was ultimately divided up and scattered across various public and private collections. Nonetheless, several fine pieces can still be seen today at the Montreal Museum of Fine Arts and the Beaverbrook Museum in Fredericton, New Brunswick.

"The Grey Ghost of the Ritz"

Charles Hosmer survived his wife by a year before his death in 1927. His $20 million fortune was divided between his two unmarried children, Elwood and Olive. Elwood moved into the family home on Drummond Street while Charles' valuable Renaissance art collection was left to Olive owing to the fact that Elwood had already become a serious collector in his own right. But, whereas Charles had been possessed of a tireless energy and optimism, his son grew up to personify the indolent existence led by the idle rich.

In 1925, Elwood married a young American in Paris, Mildred Burrill Adams. She was the sister of the unapologetic hedonist and later VP of Pan-Am Airways, Alvin P. Adams (1905-1996), who turned Norwich House, his father-in-law's country estate on New York's Long Island, into a "Gatsby-like party house"! Elwood was divorced after just two years, without offspring. Elwood then returned to Montreal and became the "constant companion" of the French portraitist Alphonse Jongers (1872-1945) who lived at the Ritz from 1924 until his death. It was a matter of debate whether Jongers was, "best known around the hotel for his imposing series of amours or for his superb portraits"!

Rather than while his hours away in his own Drawing Room at Drummond Street, Elwood became something of a permanent fixture at the hotel created by his father. Dubbed "The Grey Ghost of the Ritz," after his chauffeur dropped him off he would park himself in the large armchair to the left of the fireplace in the Palm Court. There, he would pass his gin-addled afternoons doing crosswords at the end of a Corona Coronas cigar. But, God forbid anyone who lingered near too long or had too much fun: on one occasion he summoned a waiter to loudly remonstrate, “how long are these wretched women going to stay?”!

Squaring off the Mile

Elwood Hosmer died at the family home on Drummond Street in 1947. His sole surviving heir was his sister, Olive, who had been living in her own Maxwell-designed mansion at 693 Mountain Street. It is unclear whether she leased the house or moved there herself, but it remained in her possession up until her own death in 1962. Seven years later, her principal heirs sold the mansion to McGill University when it became one of the last of the great mansions in the "Golden Square Mile" to be acquired for use by the university. Today, it serves as McGill's School of Physical & Occupational Therapy.

Ritz and Escoffier: The Hotelier, The Chef, and the Rise of the Leisure Class By Luke Barr

The Maxwells of Montreal: Early Years (1870-1922) By Violette Nakhjavani