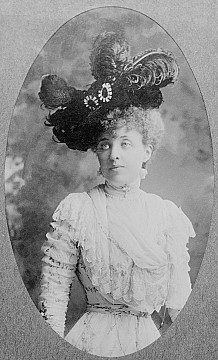 She was born in New York City, the daughter of a wealthy banker. Her half-brother, John Davis, was the uncle by marriage of Jackie (Bouvier) Kennedy Onassis. Her childhood was spent in equal parts between 24 North Washington Square in New York City, London and Paris. She had a "charming soprano voice" (a gift inherited by her three daughters too) and not before long was called upon to perform at the soirees she attended. In Paris, she was performing privately at a fundraiser when she met her first husband, Terence, who was there as Secretary to the British Legation.

Terence and Flora were married on October 16, 1893, at the Mairie near the Rue d'Anjou in the 8th Arrondissement, Paris, which was "followed by a brilliant religious function" at the British Embassy. Her dowry was $150,000. As a wedding gift, her husband gave her a diamond tiara, a diamond necklace, a diamond brooch, three rows of pearls, and a Venetian gold necklace set with pearls, diamonds and rubies. Her father gifted her, "a magnificent diamond star" and her in-laws gave them both a complete set of silver plate.

In 1900, Terence's elder brother was killed in the Boer War and Terence now found himself heir to his father, the flamboyant and popular 1st Marquess of Dufferin who had served as Governor-General of Canada and India. Two years later, Terence succeeded to the title and Florence now found herself the new chatelaine of Clandeboye in Northern Ireland. Nonetheless, they preferred to live in London at their home at 75 Cadogan Square that was not altogether dissimilar to her childhood home on Washington Square in New York. Here she was, "socially prominent in the American Colony in London".

The Dufferins were popular society figures and Flora gained a reputation as, "one of the most perfectly dressed women of the day, as well as one of the most accomplished". Having returned from France to live in London, Flora was frequently asked to sing the French songs she had learned in Paris in the homes of their friends in Mayfair. In December, 1910, she made her public debut at Bechstein Hall on London's Wigmore Street at a concert given by her friend, the "Prime Donna" Madame d'Onaida. Despite rumors following the concert that she was going to take up singing professionally, "according to her own confession, it will probably be her last appearance as a singer in public".

Aside from a talent for singing, Lady Dufferin was described as, "a capital judge of furniture, and is very tasteful in the matter of house decoration". To that end, Tatler reported that she herself was the behind the design of, "the great white staircase and magnificent blue hall" at her home on Cadogan Square. Bridge was said to be her favourite pastime, and "many select card parties are held at her (London) home".

In 1919, one year after Terence died, Flora was married "very quietly" in London's Mayfair to the 4th Earl Howe, former Treasurer of the Royal Household and at that time Lord Chamberlain to Queen Alexandra. His former wife (he was also a widower) was a sister of Lord Randolph Churchill and therefore a sister-in-law of Jennie Jerome.

The newly married couple were in fact old friends, and so after Terence's death, "they had taken great care to prevent anyone guessing of the attachment," never appearing in the same restaurant unless they were part of a group. Even news of their engagement was kept quiet so that when Flora's father was cabled the news, it was done in code. The only problem was that her father did not understand the code! So, another cable was sent and this time of course the press-friendly telegraphers were equally clear of the message!

Some reports say that her second marriage was one of convenience as her funds by then were running low. Either way, they appeared to be happily married and she died six years later at his country home, Penn House, in Buckinghamshire.

Image Courtesy of the Library of Congress; The Blackwood-Davis Wedding, October 17, 1893, The New York Times; Lady Dufferin in Concert, The New York Times, December 10, 1910; To Marry an English Lord: Tales of Wealth and Marriage, Sex and Snobbery in the Gilded Age (2012), by Gail MacColl, Carol McD. Wallace