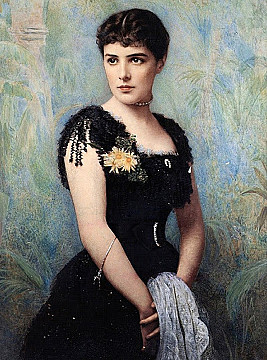 Born at 197 Amity Street, Brooklyn to the "King of Wall Street" and his refined wife, she grew up between New York and Paris. She met her first husband, Lord Randolph, at a sailing regatta on the Isle of Wight and three days later they were engaged. However, the marriage did not take place until two years later while their parents squabbled over the money that would change hands! She was bright, funny, and quick to laugh which fast made her popular in society - Queen Alexandra particularly enjoyed her company despite the rumours that her husband, Edward VII had been one of her lovers.

Lord Randolph contracted syphilis during their marriage. She continued to support him and promote him politically, but she also took several high society lovers among whom she was said to have counted Prince Karl Kinsky and Herbert von Bismarck, son of the German Chancellor. Her popularity aided both her husband's and her son's political careers, to the point that Winston (with whom she enjoyed an excellent relationship) viewed her as a political mentor. She was awarded by the Royal Red Cross for her charitable work during the Boer War, including chartering a ship to return injured soldiers. After Randolph died at just 45, she married a young officer of the Scots Guards, George Cornwallis-West, who was the same age as her son, Winston! They later drifted apart and she was married for a third time to a fairly unremarkable British civil servant, this time three years younger than Winston! She died at her home in London - 8 Westbourne Street - following a fall, survived by both her sons from her first marriage.