"The Ice King" of Boston; Founder of the Tudor Ice Company 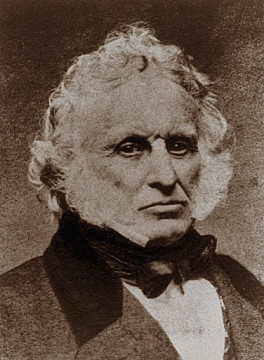 He was born at Boston, the son of a State Senator and Secretary of the Commonwealth of Massachusetts. Rather than receive a college education at Harvard, he chose to pursue a business career. Having grown up with an ice house that allowed his family to enjoy ice year-round, he took note of the new upper-class fashion for cocktails served with ice and after a visit to the Caribbean determined to take ice where previously there was none. When he was 23, he chartered a ship loaded with ice to be taken 1,500-miles to Martinique with the instructions that on arrival it was to be handed out to every bar for free. The ruse failed as bartenders there had never handled ice and didn't know how to preserve it. Unperturbed, Tudor kept sending out ice but to no avail and when his partners cheated him in 1812 he was thrown into debtors' prison.

Managing to borrow some money, he escaped and "pursued by the Sheriffs to the very wharf" he sailed to Cuba with another shipment of ice where he built an ice house and finally made some money. Always improving on his techniques to preserve ice, he extended his business to Charleston, Savannah and New Orleans. His business model was to provide free ice to barkeepers for a year, demonstrating how to preserve it, and providing them with recipes for cocktails and ice cream. By 1833, he boldly gambled that his technique for preserving ice would enable him to ship it 7,700-miles to India. His gamble paid off and in 1834 the sweltering East India merchants could now enjoy ice cubes from Walden Pond in Massachusetts. Within a few years, Tudor had ice houses in Havana, Jamaica, New Orleans, Charleston, Mobile (Alabama), Calcutta, Madras, Bombay, Sri Lanka, and Singapore. At a time when ice had now become the most transported commodity on American ships after cotton, Tudor was deservedly crowned the "Ice King".

In 1834, Frederiec Tudor married Euphemia "Effie" Fenno - he was 51, she had just turned 20. She was the daughter of Upton and Euphemia (Johnston) Fenno, of Mount Upton, New York. Effie was from old New York aristocracy. She was a grand-daughter of David Johnston, a niece of Mrs Mary (Johnston) Allen of Annandale (better known as Blithewood) and of Judge Johnston, of Bellefield. The Tudors were the parents of six children of whom four (listed above) lived to adulthood. They lived between Boston and their estate at Nahant, Massachusetts. A true entrepreneur, Frederic died a millionaire at his mansion in Boston on the northwest corner of Beacon and Joy Streets.

The Atlas of Boston History By Nancy S. Seasholes