Built in 1796, for Judge John Johnston (1762-1850) and his wife Susannah Bard (1772-1845) who was brought up in the mansion that stood exactly where the Vanderbilt Mansion stands today. The original house was given its present Colonial-Revival makeover in 1909 by the firm of McKim, Mead & White for Edith Wharton's first cousin Thomas Newbold (1849-1929) and his wife Sarah, daughter of T. Jefferson Coolidge, great-grandson of President Thomas Jefferson (1743-1826). The beautiful gardens which are open to the public today were designed by Edith's niece, Beatrix Farrand, one of the ten founding members of the American Society of Landscape Architects. FDR's Springwood was built on land that was once part of Bellefield and therefore in 1975 Newbold's grandson gifted Bellefield to the government when it became the Administrative Headquarters of the Franklin Roosevelt National Historic Site....
zoom_in 14 images 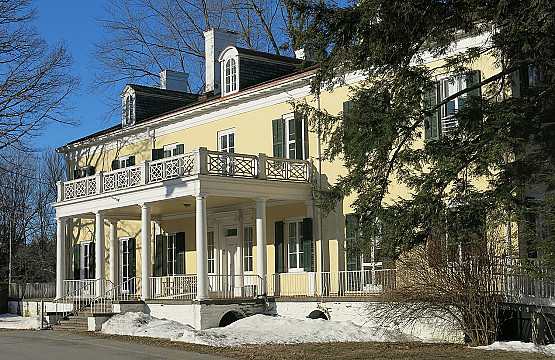 John Johnston was the Judge of the Court of Common Pleas for Dutchess County. In 1793, he married Susannah, daughter of his friend Dr Samuel Bard. One of John's great-grandfathers was among the "Nine Partners" who purchased 145,000-acres in Dutchess County back in 1697. In 1795, John acquired "Water Lot 6" a 175-acre tract of land just south of the Bard estate where the Vanderbilt Mansion presently stands. John built a 16-room house that he named "Bellefield" which remains the central core of the present mansion. He added to his land creating a 332-acre estate on which he built a barn and stables while constructing a stone wall along its boundary with the Albany Post Road.

"A Pleasant Way of Making a Fortune"... and losing it?

The Johnstons lived an extravagant lifestyle and they also had a large family of twelve children, all of whom received their early education here from various tutors and governesses. When the price of wheat fell in the early 1800s, the Judge mortgaged his property and diversifying, invested in a flock of Merino sheep; a "pleasant way of making a fortune," which he had seen work so well at nearby Rokeby. But, things took a turn for the worse in 1816 when disease laid claim to his entire flock that was said to be worth $75,000. This loss ruined the family. The Johnstons remained in Hyde Park, but he was obliged to resign his Judicial seat in 1817 and Bellefield was put on the market in 1820.

"The Admiration of All Who Saw It"

In 1826, the same year that the Holbrooks moved in, they built a square, two-story frame house just south of the main house that was most likely intended as a home for their estate manager or head gardener. That house forms the core of Springwood today. The Holbrooks (known for their charity) were unusual among their class as they kept no slaves among their servants, just two young girls described as,“free colored persons”.

Under Holbrook, Bellefield became, "the admiration of all who saw it". Ephraim Holbrook had been the partner and principal manager of the New York branch of Parish, Holbrook & Co., in Charleston, in partnership with the brothers Daniel and Henry Parish. He, his wife and their one adopted daughter lived happily in retirement at Bellefield for nearly twenty years, during which time he did much to improve and "beautify" the farm. In 1843, Holbrook moved back to New York City where he, "employed his leisure in financial operations on Wall Street" and charitable causes. When he died in 1852, he left a $400,000 fortune, $300,000 of which he left to the charities in which he was involved.

"Desirable for a Gentleman of Means"

In 1845, Holbrook was succeeded at Bellefield (now 405-acres) by James Boorman (1783-1866), the founding President of the Hudson River Railroad and the first benefactor of The New York Institute. In connection with John Johnston (no relation to the Judge), he formed the firm of Boorman & Johnston which almost entirely controlled the Dundee linen trade from Scotland. The firm was one of the largest exporters of Virginia tobacco from New York and one of the biggest importers of iron from Sweden and Russia.

In the same year that Boorman purchased Bellefield (1845), he sold its southern most 76-acres - complete with the farmhouse built by the Holbrooks - to his son-in-law, Josiah W. Wheeler, for the princely sum of $1. The Wheelers spruced up the farmhouse by adding wings either side and transformed it into an Italianate villa that they named "Brierstone" which became their summer home. In 1866, they sold "Brierstone" plus further acreage to FDR's father, and having been further enlarged and remodelled, it is best known today as Springwood or the "Home of Franklin D. Roosevelt National Historic Site".

When her father died in 1866, Mrs Wheeler also sold the Bellefield mansion with 131-acres to one of Judge Johnston's grandchildren, Francis Upton Johnston Jr. (1826-1892).

At the time that Johnston bought Bellefield, it was advertised as, "a large frame house with a frontage including wings of 95-feet, 45-feet deep, contains some 25-rooms". Also included in the sale of the estate was a farmhouse of 8-rooms and three further cottages. Outbuildings included a large barn, carriage house, stable, greenhouse, roseary, grapery and an ice-house. The land ran from the Albany Turnpike to the Hudson River and enjoyed 600 yards of waterfront. There were two lakes, "very fine" trout brooks, and a drive shaded nearly all the way up by giant forest trees. It was estimated that Boorman had spent at least $100,000 improving the estate, but it was expected to sell for half that.

Francis Johnston only managed to retain Bellefield for five years (1871) before selling up to Henry G. Coggeshall. He too ran into financial difficulties and in 1879 Anne Livingston bought it at auction. In 1883, two weeks after purchasing the neighboring estate on which he would build Crumwold Hall, Colonel Archibald Rogers (1852-1928) purchased the mansion still complete with its 131-acres. In 1885, Rogers sold the house with just 15.5-acres to Thomas Newbold (1849-1929) who increased its holdings to 19.9-acres by 1890.

Thomas Newbold was the dashing and popular, Cambridge-educated first cousin of Edith Wharton to whose home she retreated in 1906 after the dismal first viewing on Broadway of "The House of Mirth". When Newbold bought Bellefield, he was serving as the Democratic State Senator in New York representing Dutchess, Columbia and Putnam counties; and, the following year he took the post of President of the New York State Department of Health which he held until the 1890s. He was a close friend of the Roosevelts next door and was an early adviser to FDR. His wife, Sarah (1858-1922), was the daughter of T. Jefferson Coolidge of Boston, a leading Republican who like his great-grandfather, U.S. President Thomas Jefferson, had also been U.S. Ambassador to France.

In 1904, Mrs Newbold's brother had successfully used the celebrated architectural trio of McKim, Mead & White to build The Marble Palace at Coolidge Point in Massachusetts. Newbold and Charles McKim were close friends and frequent correspondents, so in 1909 it was natural that Newbold used the firm to enlarge Bellefield. Wings were added seamlessly to either side of the existing house, each of which matched it in size. The interior was remodelled to suit the new additions and on completion in 1911 the house now had 30 (many larger) rooms. On the estate, the garage house was completed in 1917.

The Newbolds spent Spring and Fall at Bellefield, dividing the rest of their year between New York City, Newport, Maine and Europe. In 1912, they commissioned Tom's cousin (Edith Wharton's niece), Beatrix Farrand, to lay out an extensive walled flower garden to adjoin the mansion's south terrace. In doing so, they (unwittingly?) employed someone who would become one of the leading - and entirely self-taught - landscape designer's of her era and co-founder of the American Society of Landscape Architects. Bellefield's walled garden is the earliest existing example of her work in the Hudson Valley and after an incredible rehabilitation plan it can still be enjoyed just as the Newbolds enjoyed it.

The Morgans & the National Park Service

Tom Newbold outlived his wife and died in 1929. For the next forty years, Bellefield continued as the Spring and Fall home of the eldest of their three children, Mary (1883-1969). She enjoyed the house for twenty of those years with her husband, Gerald Morgan, and twenty years as a widow. During her time, she grew the estate to 76-acres.

After Mrs Gerald Morgan died in 1969, her eldest son, Gerald Jr., complied with her wishes and donated Bellefield and its 76-acres to the National Park Service. In 1975, it was incorporated into the "Home of Franklin D. Roosevelt National Historic Site" with Springwood and the Bellefield became the home to its administrative offices and park maintenance facilities. The house is not open to the public, but the beautiful gardens are maintained by the Beatrix Farrand Garden Association and can be enjoyed for free.

The Widow of Rose House: A Novel By Diana Biller

Hudson Valley Curiosities: The Sinking of the Steamship Swallow, the Poughkeepsie Seer, the UFOs of the Celtic Stone Chambers and More By Allison Guertin Marchese