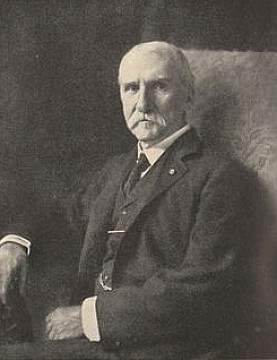 He was born at Pittsburgh and named for his great-grandfather, Major George McCully. He was educated at Pittsburgh and at the Washington & Jefferson College. In 1862, he volunteered as a Lieutenant with the 155th Pennsylvania Infantry and participated in every engagement of the Army of the Potomac from Antietam to Appomattox. Having been promoted to Captain, he was given the brevet rank of Major for distinguished service at the Battle of Quaker Road, Virginia. At the end of the war, he joined the family firm, Jones & Laughlin, steel manufacturers, retiring in 1900 as Treasurer and Vice-Chairman while retaining his seat on the board. He co-founded and served as President of the Keystone National Bank and was a director of the Pittsburgh Trust Company. In 1865, he married Isabel, daughter of Judge William McKennan and they were the parents of five children, three of whom (all sons) survived to adulthood. They lived in Sewickley at Lenmarkee, now Chatham University's Andrew W. Mellon Hall.