Built in 1887, for Major George McCully Laughlin (1842-1908) and his wife Isabel Bowman McKennan (1843-1891). Laughlin was named for his great-grandfather, Major George McCully (1752-1793), who served under George Washington and was one of the original members of the distinguished Society of the Cincinnati. Major Laughlin served with distinction in the Civil War and was at Appomattox when General Lee surrendered. Returning to Pittsburgh, he joined the steel manufacturing firm co-founded by his father, Jones & Laughlin, retiring in 1900 as Vice-Chairman. In 1917, his heirs sold Lenmarkee to Andrew W. Mellon with whom it is best associated today....
zoom_in 1 images 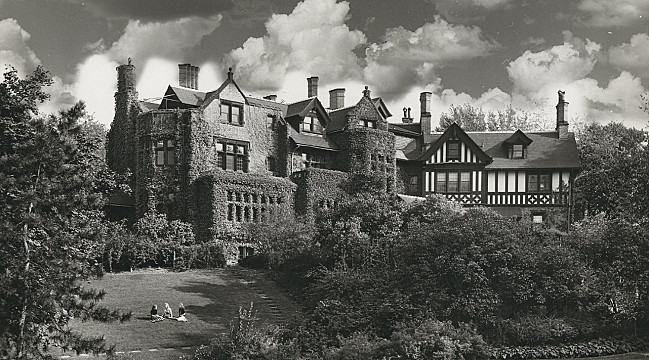 Andrew Mellon was a distinguished financier, the son of the founder of the Mellon Bank and who himself would serve under three Presidents for 11-years as U.S. Secretary of the Treasury. On purchasing his new ivy-clad, red brick, Tudor-Revival home, Mellon ("one of the most architecturally sophisticated treasury secretaries") employed his nephew, Edward Purcell Mellon (the same who built Pittsburgh's Gulf Tower) to more than triple it in size. He retrofitted the 'new' rooms with panelling, plasterwork, carved stone, stained glass, and mullioned windows salvaged from various Tudor and Jacobean mansions in England. Less authentic additions included the bowling alley and vaulted marble solarium.

Situated in a small valley, the house was approached from a terraced drive that ran up to the porte-cochere and in the grounds Mellon added a swimming pool and tennis courts. Its name is distinctly Irish, but considering both Laughlin and Mellon were the sons of Northern Irishmen, its difficult to call which of them gave it its distinct name.

In his forties, Mellon had married the 22-year old Nora McMullen, and perhaps unsurprisingly it was an unmitigated disaster almost from the get-go. After she had a string of affairs, there was a brief reconciliation before she went back to her erstwhile lover. To keep the scandal private, Mellon succeeded in changing a law so that divorce cases in Pennsylvania no longer needed to be heard by a jury. Nora, who very much wanted her story to be heard, instead went directly to the press which in 1912 resulted in a very public split! Their children divided their time between here and their mother's home.

Mellon retained Lenmarkee as his retreat from Washington D.C. and after a year in London as U.S. Ambassador to the United Kingdom he finally retired here in 1933, surrounded by one of the world's most impressive art collections. He died in 1937 and three years later (1940) his son, Paul, gave the house to Chatham University on whose board Mellon had sat for several years, and whose origins went back to the Pennsylvania Female College which, coincidentally, was founded by George Laughlin's father, James.

In 1971, a wing was added with a large dining hall and further recreational space for students. Found today on Chatham's Shadyside campus, it is known as Andrew W. Mellon Hall and is used by the university as a student center with administrative offices.

Historic Houses of the Sewickley Valley By Stephen Neal Dennis