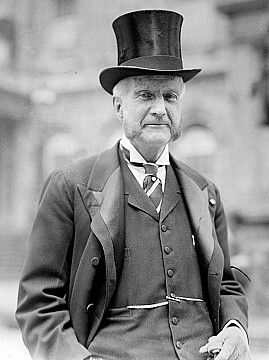 He was born in Staffordshire, England, and in 1853 came to America with his father who was a well-known manufacturer and collector of porcelain. He had been educated for a career in the church but persuaded his father to allow him to stay in New York. In 1859, he co-founded Livermore, Clews & Co., which became the second largest marketer of federal bonds during the U.S. Civil War. In 1877, he founded Henry Clews & Co. which was listed on the New York Stock Exchange and made him a multi-millionaire. Politically, he was a Republican and he personally brought together the "Committee of Seventy" that drove the death knell into the corrupt crime ring run by Boss Tweed at Tammany Hall. He was a personal friend of Abraham Lincoln and served as an economic consultant to Ulysses S. Grant. He was twice offered the Secretaryship of the Treasury and twice the Republican nomination for the Mayor of New York.

He was a founder of the Union League Club and in retirement wrote what is considered a classic of its genre: Fifty Years in Wall Street. In 1874, he married Lucy Madison Worthington, who is usually referred to as the grand-niece of President James Madison, but as detailed in her biography, their relationship was somewhat more distant. The Clews lived between 27 West 51st Street in New York, "one of the finest residences west of Fifth Avenue" and their summer home at Newport, The Rocks. They had two children who reached adulthood, both of whom were notably eccentric, though they did not get on: (1) Elsie Clews Parsons was an anthropological scholar and an expert on folklore (2) Henry Jr., was an artist and sculptor who created Chateau de la Napoule on the Cote d'Azur.