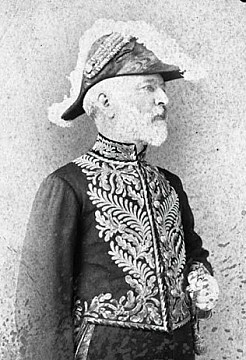 He inherited his father's vast coal empire and ran the mines with an iron fist, in a not dissimilar manner to America's largest coal miner, Edward J. Berwind. He skirted all attempts made by his numerous employees to form their own unions, and the safety record of his mines were among the worst on the continent: the average in North America was 6 deaths per million tonnes of coal produced, while in Dunsmuir's mines they averaged 23 deaths per million tonnes. Nonetheless, he was elected Premier of the Province of British Columbia and afterwards served as Lieutenant-Governor. However, he was never knighted. Today he is best remembered by Hatley Castle, the home he built for his family on the Esquimalt Lagoon on Vancouver Island. He and his wife had twelve children, of whom ten (all listed above) reached adulthood. James had inherited $15 million from his father, but left just $3.3 million to be divided between his children.