Completed in 1909, for The Hon. James Dunsmuir (1851-1920) and his American wife Laura Miller Surles (1858-1937). The 40-room castle sits amidst 585-acres of exceptional landscaped gardens commonly referred to as the "Hatley Park National Historic Site" that includes both the castle and the equally splendid "Hatley Gardens". During World War II, a contingency plan had been hatched between MacKenzie King and King George VI to house the Duke of Windsor at Hatley should the Germans have invaded Britain. Today, it is the home of Royal Roads University and has been featured in several movies including X-Men, Deadpool II, and on Netflix' Arrow....
zoom_in 13 images 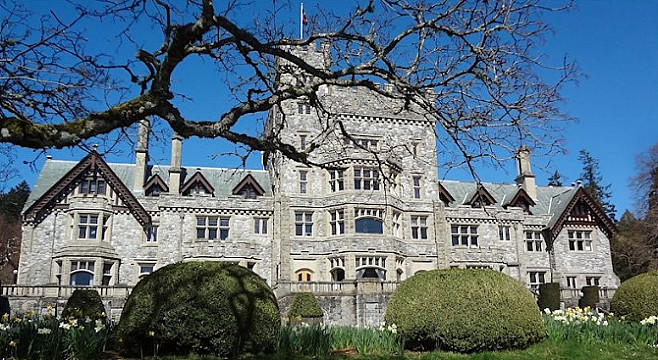 James Dunsmuir was the eldest son of the "Coal King" of Victoria, Scots-born Robert Dunsmuir (1825-1889). He was educated in Ontario and in Virginia where he met his wife, Laura, whose maternal family (the Byrds) built the Westover Plantation. They were married in 1876 and returned to Vancouver Island, but it wasn't until 1892 that they built their first family home together, Burleith. In 1906, James was appointed Lieutenant-Governor of British Columbia and that meant moving with his family into the official residence, Cary Castle. In the same year, he scrapped his plans to enlarge Burleith and paid $50,000 for 250-acres (later expanded to 800-acres) on the Esquimalt Lagoon to a British officer, Lt. Gilzean Roland Whately Stuart, who'd named the estate "Hatley Park".

The Dunsmuirs commissioned local, self-taught architect Samuel Maclure (1860-1929) to design their castle in such a way that it would immediately give the impression of great antiquity. Next, they employed Brett & Hall of Boston - who enjoyed  impeccable credentials - to landscape and create Hatley's magnificent gardens out of the wilderness complete with man-made waterfalls, lakes, water wheels, and bridges. Work began in 1908 and incredibly, the castle was finished by the following year. The project cost over $1 million and those involved took British Columbia's richest man to his word when he was heard to say, "money doesn't matter, just build what I want"!

The South Front of the castle enjoys a majestic view over the Juan de Fuca Strait with the snow-capped Olympic Mountains beyond. The castle measures 200-feet across with a width of 86-feet while the central tower reaches up to a height of 82-feet. The 40-rooms included 20-bedrooms for family and guests spread over three-stories (and a basement), covering over 50,000 square feet of living space. In terms of ostentation, Hatley is about the same size as Rockefeller Jr.'s Rockwood Hall in New York.

Being an obsessive fisherman, Dunsmuir had a fishing lodge built on the Cowichan River - where he died in 1920 - while he stocked the woods around the castle with game birds for shooting. The Dunsmuirs employed 100 groundsmen (mostly Chinese immigrants housed in the woods) to maintain the Japanese, Rose and Italian gardens.

The estate itself was a working farm with a modern dairy, its own slaughterhouse, a smokehouse and refrigeration plant. The stable floor was laid with rubber bricks to protects the hooves of his horses. Milk, eggs lamb, wool, timber, potatoes, apples, hay and even bananas and flowers from Mrs Dunsmuir's conservatories (her famous white orchids) were among the produce sold in the local markets. Dunsmuir had hoped that the farm would support itself, but in fact it required an extra $1,500 a month to break even.

The Yacht Parked at the Foot of the Lawn

Dunsmuir had an abject fear of the sea, but his love of fishing and hunting necessitated a boat to explore the islands about. His first yacht burned in the water, so he promptly had a second one built on the Clyde in Scotland at a cost of $200,000. The 218-foot yacht "Dolaura" was anchored on the lagoon at the foot of the castle's rear lawns. It was almost as luxurious as the castle itself boasting: a Spanish mahogany-panelled drawing room of 24x18 feet with a huge fireplace, a library, a smoking room, and a dining room that sat 24 guests. Dunsmuir's sleeping quarters included his bedroom, a large sitting room, dressing room, and a bathroom with Venetian marble washbasins and sterling silver fittings.

After Mrs Dunsmuir died in 1937, her children put the castle up for sale. But, due to the war and a declining interest in properties of its size, it was valued at just CDN$260,000. Even at that figure, it was still a huge asking price and a buyer could not be found. A film was made in 1938 (see the video clip in the side bar) to tempt buyers from California, but although even then movie producers saw its appeal as a filming location, the price remained prohibitive. In 1939, the estate manager, John Graham, first opened its doors to the public and a public auction of its many valuable furnishings was set for June.

A Safe Home for the Duke of Windsor?

In May, King George VI and the Queen arrived in Vancouver for the first leg of their 1939 Canadian Tour. At Hatley, they walked along the beach and took tea on the terraces. Two years later, while war raged across Europe, Canadian Prime Minister MacKenzie King was invited to stay at Balmoral Castle in Scotland with the Royal family. Conversation turned to the King's brother, the Duke of Windsor, who was living out the war in the Bahamas, but the establishment was concerned by the dubious company he kept there.

As it transpired, the Department of Defence had acquired Hatley Castle in 1940 to serve as an extension to the Esquimalt Naval Base. The government paid $75,000 for it - less than the price of the stone wall that was built along the roadside boundary. However, it occurred to the King that with the added protection of the air defence units on the base, Hatley Castle could serve as an ideal home for his errant brother should a Nazi invasion take place or it was necessary for him to be removed from the Bahamas.

In the meantime, Hatley was converted into a Naval training college which eventually evolved into the Royal Roads Military College as it remained up until 1995. That year, it was acquired by the Royal Roads University and serves as its administrative centre. The house and grounds are however both open to the public and Hatley is one of British Columbia's most popular tourist destinations. Aside from being a popular venue for weddings, honeymooners and for corporate events, it has caught the eye of Hollywood and has been featured in numerous TV shows (Arrow) and movies, perhaps most notably in two series of the X-Men as Professor Charles Xavier's "School for Gifted Youngsters".

British Columbia: A Natural History of Its Origins, Ecology, and Diversity with a New Look at Climate Change By Richard Cannings & Sydney Cannings

What Manner of Man Is This?: The Duke of Windsor's Years in The Bahamas By Orville A Turnquest