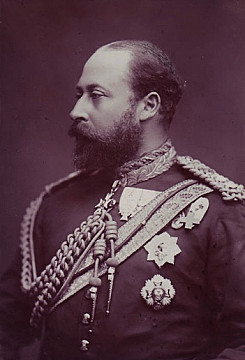 When he visited New York in 1860, a crowd of 300,000 (half the of the city's entire population) came out to watch his procession along Broadway. 5,000 people were invited to the ball to introduce him to New York society, but the ballroom at the Academy of Music that hosted the event was only designed to hold 4,000 people and his entrance was delayed after part of the gave way and had to be rapidly repaired! "Bertie" was a well-known bon viveur and he particularly enjoyed the company of American women, as he said, “because they are original and bring a little fresh air into Society. They are livelier, better educated and less hampered by etiquette. They are not as squeamish as their English sisters and they are better able to take care of themselves". Among those with which he was known to have had affairs included Jennie Jerome, Jeannie Chamberlain, Consuelo Yznaga and Flora Sharon.