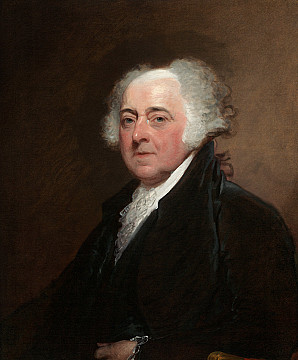 He was preceded in the Presidency by George Washington and after serving one term in office for the Federalist Party he was succeeded in 1801 by his Vice-President, Thomas Jefferson. He was born into a respectable Puritan family at Braintree, Massachusetts. He was educated at Harvard, after which he determined to become "a great man". He became a lawyer and in 1775 went to Philadelphia as one of the Delegates from Massachusetts to the Continental Congress. He perhaps more than anyone else in Congress pushed for an end to British rule. On the outbreak of war, he was appointed head of the Board of War & Ordinance and working up to 18-hours a day he was described as a, "one man war department".

Between 1777 and 1782, he was on service in Europe, first as a diplomat in France and then as U.S. Minister to the Netherlands. He co-negotiated the Treaty of Paris (1783) that ended the war and saw the United States globally recognized as an independent nation. From 1785, he was 1st U.S. Minister to Britain. Returning to Massachusetts in 1788, America was preparing for its first Presidential election and as the Virginian George Washington was considered a shoe-in, Adams was favored for the Vice-Presidency as many thought it should fall to a Northerner. In 1789, Adams was voted the 1st Vice-President of the United States under Washington. During this time, he played a minor role in politics and did not enjoy the inactivity of the role, but nonetheless served two uncontested terms.

The 1796 Presidential Election was the first contested election in the U.S. and Adams won it for the Federalists, narrowly defeating Thomas Jefferson by 71 votes to 68. He followed Washington's example and used his term to promote Republican values, civic virtue, and to avoid war - this time against France.

Passionate Sage: The Character and Legacy of John Adams By Joseph J. Ellis