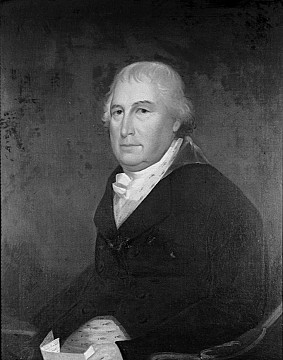 He was born in County Antrim, Northern Ireland, and according to Turtle Bunbury's excellent site he was a nephew of the "notorious" Redmond Kane ("a pervert and a lawyer of extensive practice in Dublin" said J.E. M'Kenna) who was either a brother or a cousin of the Kanes who founded the Bank of Kane & La Touche in Dublin. Like his uncle, John's father (Bernard) was also an attorney and a crypto-Catholic, ie., someone who not only switched religions from Catholic to Protestant, but also changed names to appear more English - Kane was O'Kane and before that O'Cahan.

John Kane was sent to New York at the age of eighteen (1752) and entering the linen trade he first settled at Fredericksburgh where he was a large store owner. In 1775, he was appointed to the Provincial Congress of New York representing Dutchess County where he held an estate (Sharvogne or Sharyvogne) named for that of his uncle's, Charles O'Hara's, in Ireland. He was appointed a Colonel in the American militia, but "disgusted by an insult to his patriotism" he switched sides to the British and consequently had his property confiscated before leaving New York for Nova Scotia. He later returned, settling with two of his sons at Albany, New York. His wife, Sybil, was the daughter of the Rev. Elisha Kent whose second wife was the sister of Thomas Fitch, Governor of Connecticut. The Fitch connection made Sybil a step-cousin of Mrs Elizabeth (Fitch) Rogers and therefore connected to some of the most influential merchants at that time in New York. John and Sybil had 13-children, twelve of whom (listed above) lived to adulthood.