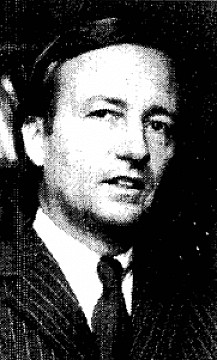 He was born at Galveston, Texas, where for 35-years his father was a postman. He graduated in Economics from the Texas Agricultural and Mechanical University (1954) before joining the army and being sent to language school to study Russian. After being posted to Turkey, he was discharged in 1957 and entered Harvard Law School, receiving his Juris Doctor in 1960. He began his career as an associate lawyer with Chadbourne, Parke, Whiteside & Wolff in New York City. In 1973, he and two others borrowed $4.5 million to buy Leckie Smokeless Coal. Turbo-charged by the oil crisis, within just one year its profits had helped finance a corporate empire of some 16-entities including 3-coal mines, 2-insurance agencies and a Wall Street bond firm. Their collective earnings for 1974 were reported at a whopping $50 million. By February 1979, Fortune magazine listed him among America's richest with assets valued at $200-300 million.

But, almost as quickly as he had realized his extraordinary wealth, the wheels began to fall off. Samuels had wasted no time buying no less than five luxury homes and filling them with expensive artwork and equally expensive guests. He was still asset rich, but he quickly became cash poor when he was asked to repay the loans that had shot him into the financial stratosphere. Just two months after being lauded in Fortune magazine it was also becoming clear that it wasn't just the loan repayments causing his empire to implode. In April, an executive opened up about Samuels' chaotic leadership: "there was little financial planning, very few accounting controls, and a capital structure highly leveraged toward the short-term... No one knew what anyone else was doing. It was a zoo... The first rational business decision we ever made was to refuse delivery of a Falcon corporate jet".

Aside from accumulating material wealth, Samuels had been quick to recognize that in order to place himself among those within the highest strata of society, he must become a Patron of the Arts. Several sizeable checks later, by 1978 Samuels had succeeded in becoming Chairman of the New York City Center, the New York Opera, the New York Ballet Company, and the Vivian Beaumont Theater; and, hiring Richmond Crinkley, he formed an artistic brain trust to oversee his vision with Woody Allen, Edward Albee, Ellis Rabb, Sarah Caldwell, Robin Phillips and Liviu Ciulei. But, mirroring his dizzying rise and fall in business, neither was his reign in the arts destined for longevity. Often coming across as aggressive, his outspoken opinions sparked internal feuds and by 1982 he had resigned all chairs. His high-handed manner was also demonstrated when he abandoned his luxurious office in the Cunard Building and dismissed all the staff. He waved it off as, "a personal question, having to do with my own taste, and the stage I am in. It is rare for anyone to have an aesthetic philosophy with regard to business, and I found the office became a burden, people paid more attention to it than to my business or to me".

At his peak, Samuels owned an art-filled townhouse in Manhattan at 123 East 79th Street that he bought from Marietta Tree; a townhouse in London's Piccadilly; an estate at Southampton on Long Island; Salutation, the former J.S. Morgan estate also on Long Island; and, the League-Kempner House at 1702 Broadway in his native Galveston. Yet, by the early 1980s Samuels was ducking from the law and by the end of the decade he was declared bankrupt. When the U.S. Bankruptcy Court put Salutation up for auction in 1993, New York Magazine diplomatically reported that Samuels was, "detained in Bahrain indefinitely" - a polite way of reporting that he had in fact been imprisoned there.

From the 1990s, his name all but evaporates in the U.S. and he appears to have remained in Bahrain before his death in Dubai was quietly announced in 2019. The only property he managed to hold onto was that in Galveston, which was also the first he bought in 1972 just before he made his mint. But, when it was sold by his heirs in 2021 it fetched just $1.4 million as despite outward appearances, inside it was close to collapse.

Back in 1958 while he was studying at Harvard, Samuels married Ellen Richards who had just graduated in economics from Radcliffe College. They were the parents of four children, including the actor John Stockwell and the Vice-President of Arts & Sciences at King's College, London, Evelyn Welch, the mother of Florence Welch, the lead singer of the hugely successful English band 'Florence and the Machine'. The Samuels separated in 1979 and by 1981 John had taken up with a boyfriend, David, at his 79th Street townhouse. He and David met when Samuels hired him to be his piano teacher. Tragically, Mrs Samuels (who suffered from a bipolar disorder) took her own life in 1999.