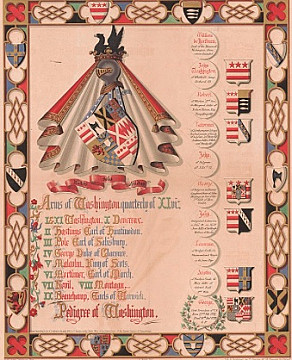 He was born at the home of his maternal grandparents at Tring in Hertfordshire while his father was employed as a Lecturer at Oxford University. He was destined to follow his father's career as a clergyman but the English Civil War saw his Royalist father stripped of his valuable grace-and-favor living at Purleigh and banished to Little Braxted. John's mother and siblings did not follow and took up in the household at Tring of John's wealthy uncle, Sir Edwin Sandys, the Treasurer and co-founder of the Virginia Company. Through his uncle's patronage, John was apprenticed to a tobacco merchant in London and gained a valuable knowledge of colonial trade.

In 1656, John invested in a ship and set sail for Virginia to trade on his own his account. Accompanied by his cousin, James Washington (a merchant who traded tobacco between London and Rotterdam), he elected to remain in the colony where he met and married Anne Pope. Having received 700-acres at Maddox Creek from his father-in-law as a wedding gift, they set up home at Bridge's Creek. He became a successful planter, working the land with slaves and indentured servants, and in 1674 he and his cousin, Nicholas Spencer, received a land grant of 5,000-acres in Fairfax County where his famous great-grandson developed Mount Vernon. He was elected to the Virginia House of Burgesses and was appointed a Lt.-Colonel in the militia in the lead up to Bacon's Rebellion in 1676.

Under John's command, his troops killed six chiefs from various Indian tribes when what should have been a peaceful 'parlay' got out of hand. In retaliation, the colonists were subject to numerous attacks and Governor William Berkeley strongly rebuked Washington's heavy-handed actions as relations between the natives and colonists continued to deteriorate. Washington was married three times and was survived by three children including Lawrence, the grandfather of President George Washington.