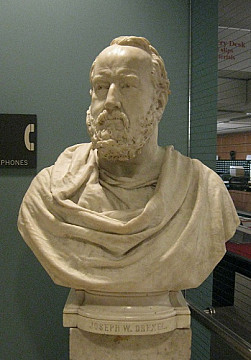 Born in Philadelphia, he was sent to manage Drexel & Co. in New York. When his brother, Anthony, reconstructed the firm with J.P. Morgan five years later, Joseph retired from finance. He remained on as a partner in Drexel & Co., Barings Bank and Rothschilds et Fils, but now dedicated his life to philanthropy and the arts: He bought a 200-acre farm near New York where the jobless were clothed, fed, housed, and taught agriculture until a job could be found for them. He owned another vast tract of land in Maryland that he named "Klej" Grange (an acronym using the first letters of each of his daughters names). This was divided into lots upon which he built houses, mills etc. and then sold to the poor at no more than cost value. He had another farm in New Jersey, Cedar Hill, which replicated that in New York and a further 7,000-acres in Michigan which replicated Klej Grange. He was musically talented, President of the Philharmonic Society and a Life Member of the Metropolitan Museum of Art. Every Thursday without fail, he held a soiree with a musical quartette at his townhouse at 103 Madison Avenue.

Colonial And Revolutionary Families Of Pennsylvania. By John Woolf Jordan