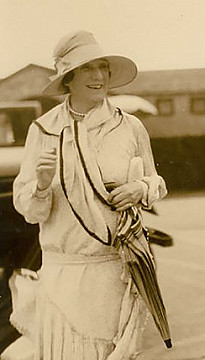 She was born in Philadelphia, the younger sister of Edward Berwind who co-founded the Berwind-White Corporation and by 1900 was the largest individual owner of coal mines in the world. After Edward's wife died in 1922, he invited Julia to live with him and she acted as hostess to his social functions in New York and perhaps most famously at his magnificent summer estate in Newport, The Elms. Edward died without children in 1936 and Julia inherited his estate which was valued at $31.4 million. She wintered at the Savoy-Plaza Hotel in New York and continued to summer at The Elms in Newport where she is remembered as one of the last society hostesses of the Gilded Age

In 1958, it was reported that she, Mrs Daisy Bruguiere of Wakehurst, and Miss Edith Wetmore of Chateau-sur-Mer, were the last three Newporters who still had liveried footmen assisting their butlers. From 1928 to 1939, Miss Berwind was President of the Social Service Committee of the Beekman Street Hospital and she co-founded the Lisa Day Nursery. She never married and The New York Times reported, "the tall, massive spinster - regarded by many Newporters as indestructible - died in New York" at the age of 95.