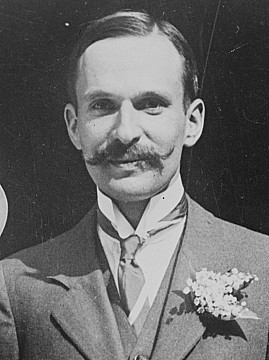 He was born in New York City and graduated from the School of Mines at Columbia University. While a freshman, he drew the ire of the sophomore class by refusing to wear a freshman's cap. When they determined to force it upon him, Gould pulled a revolver and fired shots over their heads, sending them running. He was disciplined by his fellow students and for the remainder of his time at Columbia they made sure the act was not forgotten. On graduating, his surname saw him added to the boards of several of the railroads associated with his grandfather, Jay Gould: the Denver & Rio Grande; Missouri Pacific; Western Pacific; and the Texas Pacific. He was also a director of the Western Union Telegraph Company in which his grandfather had gained a controlling interest more than thirty years before. Having initially expressed an interest in the railroad industry, within only a few years he became less enamored.

In 1917, he was commissioned as a Lieutenant and went with the American Expeditionary Force to Europe as an observer and interpreter. During the last weeks of the war, he was under almost constant fire with the 79th Division during the Meuse-Argonne offensive. Returning home, he became a partner in the brokerage firm of J.N. Noyes & Co., but resigned to manage his deceased father's complicated estate, of which he was one of the two executors. He used his inheritance to invest in property and was President of the Arezzo Realty Company (named after his wife's home town in Italy), keeping offices at 39 Broadway. In 1917, he surprised his parents, family, and society when he announced that he had married his sister's Italian art tutor, Annunziata Lucci. They had three children and lived between 160 East 72nd Street and Furlough Lodge in the Catskills.