Built from 1890, for George Jay Gould (1864-1923) and his first wife, Edith Kingdon (1864-1921). Situated in the Dry Brook Valley and constructed in a rustic style with rough-hewn logs, this was both their summer home and shooting lodge. It overlooks Furlough Lake in the western Catskills - some 2,200-feet above sea level - and stood on an estate that grew to just under 5,000-acres of what was then almost entirely virgin forest. By 1900, they had enlarged their original home to 26-rooms, but in stark contrast to their city and winter residences, this always remained an informal family home. It is still in the Gould family today, and remains a private home....
zoom_in 9 images 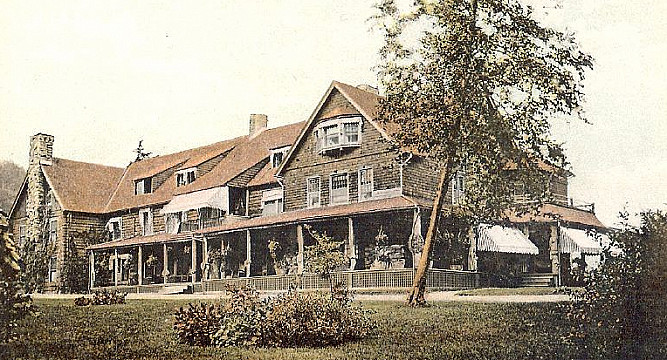 George J. Gould was the eldest son of Jay Gould, one of the most infamous "Robber Barons" who died with a fortune of $84 million - and a reputation as one of the most despised men in America. In 1886, George came to Furlough Lake for some trout-fishing, which so happened to be 20-miles south of the Gould Homestead, where his father was born. He was so enchanted with it that he told his host if he could ever buy the lake and build a summer home here, he would. He was directed to Samuel Coykendall in Kingston and by the time he returned home, he was the new owner of the lake and 2,300-acres.

He built his new home on the hillside by a stream that tumbled its way down a further 250-feet into Furlough Lake. From this position it enjoyed views in all directions of some of the highest peaks in the Catskills. The house has been added to either side over time but the original heart of it was designed by an architect from Kingston. Built of rough-hewn pine logs over two stories, it measured 100-by-46 feet with a rustic wraparound porch propped up by knobbly black birch. The ground floor contained just three reception rooms: the sitting room, billiard's room and dining room. The front door opened straight into the sitting room with its large field stone fireplace; floors brightened with Dagestan rugs, bear skins, and a giant Bengal tiger skin; and, walls decorated with elk and deer antlers from which were draped guns and trophies. The rustic staircase led up to the second floor which contained one living room and a number of bedrooms. The log house provided an informal alternative to their showpiece homes at 857 Fifth Avenue and Georgian Court.

By 1898, the Gould estate had grown to 4,958-acres and they employed a permanent staff of 20 to maintain it. Either by lease or ownership, Gould enjoyed roughly 4-miles of what were considered some of the finest trout streams in the state, and his 13-acre lake was well-stocked with black bass, pickerel, and further trout. At the foot of the lake from the house was a rustic bridge that led towards a gate which opened into a 500-acre preserve on which roamed 30-Colorado elk and 12-Virginia and black-tailed deer. A cottage just beyond the gate housed the gamekeeper and beyond that were the stables and kennels.

Aside from horses, South Down sheep, and a dairy herd of 30-Guernsey cows, the Goulds kept: 14-Russian wolf-hounds; 24-English setters; 20-greyhounds; 12-pointers; and, several Beagles. The larger hounds were for larger game such as bear and lynx. Otherwise, the woods teemed with pheasant, partridge and quail, while around the lake itself sheltered wood duck, woodcock, coot, and other water fowl. There was also a dovecote with, "2,000 doves and pigeons of every sort and kind, harmoniously living together in a many-storied, handsome building that looks like a first-class New York apartment house".

Furlough - sometimes misspelt 'Furlow' - Lodge was the only one of George's three homes not to be sold by his children when he died in 1923. Some of his children had built their own cottages on the estate, such as Jay Gould's Forge Cottage and Mrs Joya Drexel's Eagle Lodge, but Furlough itself was inherited by his eldest son, Kingdon Gould Sr.

Kingdon summered here with his wife, the Italian artist Annunziata Lucci, and their three children. He died in 1945 and from then until only recently Furlough Lodge has been the summer home of his only son, Kingdon Gould Jr., former U.S. Ambassador to Luxembourg and the Netherlands. The Gould family still enjoy Furlough Lodge and they continue to own several thousand acres here, just west of what is now the Belleayre ski resort.

The Catskills: A Photographic Portrait By Michael P. Gadomski

Kingston and Ulster Townships By Susan B. & Karl R. Wick