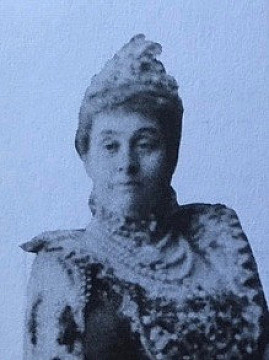 She was born into a comfortable home in Lowell, Massachusetts, to a greengrocer who by the 1850s had made a fortune and entered local politics. Nonetheless, those members of society in Boston and New York who sought to exclude her drip-fed the press and anyone who would listen tales of her having been a "pretty, peachy-faced" waitress in a restaurant, a shop girl or even a mill girl before being scooped up by the widowed multi-millionaire hotelier 25-years her senior, Paran Stevens (1802-1872).

Paran was the country's leading connoisseur on fine wines and he was the proprietor of luxury hotels in Boston, Philadelphia and New York. Nonetheless, for taking Marietta as his bride, he now found himself tarred by certain ill-intentioned members of society as "stupid" and was tarred with the same brush as having started life as a mere "stable boy".

Marietta was ambitious, a quick study and eager to go far in life. Under Paran's careful tutelage she learned how to walk and talk with ease among the cream of society. But, she was only just about tolerated in Boston until her husband died in 1872. She then took herself off to Europe with her beautiful daughter in a bid a to secure for her a suitably aristocratic title. After a few bumps and perhaps not with quite the dazzling title she would have liked, Mrs Stevens nonetheless succeeded in her efforts. Returning to New York, she later held court at 1 East 57th Street, once the home of her nemesis, Mrs Jones.

Her obituary in the New York Times read: "No woman in New York society was better known than Mrs Paran Stevens, and despite certain idiosyncrasies that all her friends thoroughly understood, no woman was better beloved by her friends. She was an impulsive woman, never hesitating to give full expression of her feelings about everybody and everything uppermost in her mind for the moment. But her impulsiveness took a charitable turn to an extent that would scarcely be believed by people who did not know her... Probably no woman conspicuous in New York society has been more talked about than Mrs Stevens, and it was a favorite jest of hers that the public picked out nothing but her faults. She was an ambitious woman, keen for social prestige, and she stamped out everything that stood in the pathway of her ambition. She was equally well-known in New York, Paris, London, Berlin and Vienna".