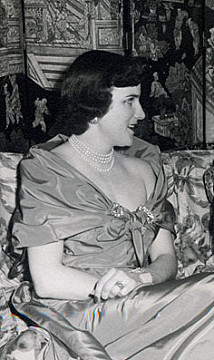 She was born in Montgomery, Alabama. Her grandfather was the son of a poor farmer who rose to the rank of Colonel in the Confederate Army before serving seven terms in Congress and ending his career as Governor of Alabama. Oatsie was educated in Montgomery at the exclusive Margaret Booth School for Girls before being sent to Europe where she attended a boarding school in Brussels, Belgium, and an all-girls Catholic school in Bavaria, Germany. Returning to the States, she became a debutante in New York before marrying Tommy Leiter in 1942, grandson of Levi Leiter, co-founder of Marshall Field & Co., and a first cousin of the 20th Earl of Suffolk.

The Leiters lived in what had been the stables at Tommy's grandfather's colossus at 1500 New Hampshire Avenue off Dupont Circle. They bought Land's End as a summer home at Newport in 1952 but divorced two years later. Selling Land's End but retaining its garage that she converted into "The Whim," in 1959 she bought 3259 R Street in Washington D.C. where she entertained the likes of Noel Coward, Ian Fleming, JFK, the Reagans etc. One of her guests recalled that, "she handled her guests like kindling, setting fires among and between people, until the whole party was aflame”. Her boldness and sense of fun set her parties apart from the more formal hostesses and for half a century she reigned to become one of the last Grande Dames of Washington and Newport, leaving a gem: "Life is a theater. Unfortunately, not everyone knows how to act".