Completed in 1893, for Levi Z. Leiter (1834-1904) and his wife, Mary Theresa Carver (1844-1918). Facing New Hampshire Avenue at the corner of Nineteenth Street, the double-story semi-circular balcony seen on the left in the picture below overlooked Dupont Circle to its south. The Leiter's 55-room townhouse was designed by Theophilus P. Chandler Jr., with the specific aim of luring suitable husbands for their three daughters. Construction costs came to $125,000 and on completion it was reputed to be the finest private house in the capital and the first of some forty large houses put up in the Gilded Age. It remained in the Leiter family until 1944 and it was demolished three years later to make way for what is today The Dupont Circle Hotel....
zoom_in 7 images 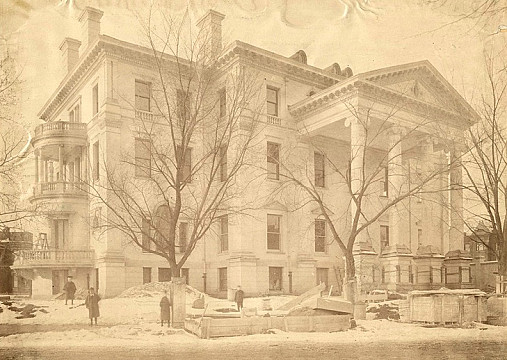 Levi Leiter went from being a peddler in Ohio to co-founding the eponymous Chicago department store, Marshall Field & Co., before selling out to invest in real estate thereby helping to rebuild Chicago after the Great Fire of 1871. While he cared little for society and enjoyed travelling and growing his collection of rare books and manuscripts, his wife was determined to see their daughters marry well and to that end they moved to Washington.

In 1891, Mrs Leiter paid William Walter Phelps a fraction over $83,276 for the empty lot that occupied two-thirds of an acre on New Hampshire Avenue at the corner of Nineteenth Street. Ten years previously, Phelps had also sold the land on which James G. Blaine built the Blaine Mansion in which the Leiters had been living since 1883. Hiring the renowned Philadelphia architect Theophilus P. Chandler Jr., their new townhouse would stand three stories high over a raised basement with a frontage of 96-feet, a depth of 75-feet, and a height of 62-feet. The gardens were designed by Frederick Law Olmsted and the property was surrounded by a balustraded limestone wall covered in English ivy.

Mrs Mary Leiter was perhaps best described by her eldest daughter: "She would show absolute composure in an earthquake, and always accept the inevitable without a shadow of discomfiture. She is self-centered, which I suppose is natural to anyone with such absolute self-confidence, and all our talks seem to revolve about small episodes in her existence... She is peculiar, yet magnificent". Her detractors called her "vulgar" and insinuated that she grew up penniless which was not the case at all; and, whereas she was prone to making memorable malapropisms, her "vulgarity" seems to have been nothing other than her ability to spend more than those jealous of her wealth and position.

Mrs Leiter's unswerving self-confidence quickly saw her become part of Mrs Cleveland's inner circle and by 1890 it was reported that the Leiters were, "the leading resident hosts of the Capital (moving) the social center to Dupont Circle". Eliminating any lingering doubters, Mrs Leiter scored a home run in 1895 when she hosted 150-guests to the wedding of her eldest daughter, Mary, to a rising star on the British political scene: Hon. George Curzon, heir to the Barony of Curzon and shortly to become Viceroy and Governor-General of India - the crown jewel of the British Empire - Lord President of the Council and Leader of the House of Lords before being elevated to a Marquessate.

Mrs Leiter had to work a little bit harder with her two remaining daughters to match the success of her first daughter's marriage: Daisy eventually fell into line with her mother's ambitions when she married Henry Howard, 19th Earl of Suffolk, but not before the Leiters had seen off a string of mere American suitors: Bob Warrach, Craig Wharton Wadsworth, and finally William S.K. Wetmore to whom she was engaged in 1898. Daisy's marriage took place in 1904 in the Drawing Room at New Hampshire Avenue and it was followed just weeks later by Nancy's marriage in the same room to Colin Powys Campbell, a British but untitled Major in the Indian Cavalry to whom she'd been engaged for four years by the time they finally tied the knot on account of her parents' "disapproval".

After Levi Leiter died in June, 1904, Mary continued to make the mansion her late fall and winter home. Fittingly, the gardens were planted with a variety of evergreens all brought over by an expert gardener from England - rhododendrons, climbing ivy, roses that bloomed nearly all year round and no less than eight different species of holly. She continued to host lavish entertainments until her death in 1913, but added a two-story wing to the rear of the house on 19th Street which she made her living quarters.

In September, 1905, the new Russian ambassador in Washington, Baron Rosen, approached Mrs Leiter with the idea of acquiring her house as their new embassy. For the previous six years the Russians had occupied Alexander Graham Bell's mansion on Scott Circle but Rosen wanted something, "more elegant and commodious". Although Mrs Leiter had always been quite open that she was thoroughly opposed to the idea of selling or even leasing her Dupont Circle mansion, it having only been used sparingly in the last few years she found herself open to suggestions. Ultimately, however, she did not sell.

In 1908, the Leiters only son, Joe, married Juliette Williams (great-granddaughter of General John R. Williams) and as a wedding gift the elder Mrs Leiter deeded the house to the newly-weds. Whereas Levi Leiter had gained a reputation as a cautious businessman, Joe would be remembered for his failed attempt to corner the wheat market that cost him $10-million; and, his subsequent mishandling of the Leiter estate that ended up in an 8-year trial between him and his two elder sisters. Although he won the suit, he and Daisy were forced to resign as trustees and were ordered to pay huge sums into the estate.

Joe was a familiar sight in Washington, racing up and down the capital's streets in his silver-gray racing car. Juliette continued to host the political and diplomatic elite, and the first meetings of "The Dancing Class" that she founded were held in the ballroom. This was the only one of Joe's houses that didn't have its liquor store emptied: In 1921, robbers stole liquor valued at $300,000 from his home in Virginia; and, in 1925 his summer home in Massachusetts was raided and he was indicted after the Police removed 585 bottles.

In May, 1917, the Leiters allowed the Italian War Mission to set up their headquarters here. The mission was headed by headed Prince Ferdinando of Udine and he was joined by other influential Italians such as the inventor of radio, Guglielmo Marconi, to work out financial and trade agreements between Italy and the United States. Towards the end of World War I in 1918, the Leiters were back in their home and had several high-ranking British officers living with them when they hosted a Victory Ball two weeks after peace was declared in Europe. The following November, they hosted another memorable party for the Prince of Wales while he was in Washington for 10-days as a guest at the Perry Belmont House.

Joe died in 1932 and his only son, Tommy, inherited the lion's share of what was left of his fortune that should have been at least three times more than the $10-million that remained. In 1933, Tommy auctioned off his grandfather's valuable library of Americana but while he had inherited the house on New Hampshire Avenue it remained home to his mother, his father having stipulated: "I request that Thomas permit my wife, Juliette, during her life to use the house... for herself and as a common home for the children".

While Tommy never lived here, he converted the old stables into a rather luxurious apartment where he was joined from 1942 by his wife, Oatsie Charles, who is widely recognized today as the last Grande Dame of Washington D.C. and Newport.

Sometime in the late 1930s Juliette closed the main house, preferring to pass her winters in Chicago. It was opened again for its last hurrah in February, 1941, when she hosted 300-people for the marriage of her only daughter, Nancy. But no sooner had the guests left, she leased the house to the U.S. government for office use by the Soviets. Juliette died in 1942 and two years later Tommy sold the old family home for $190,000 to Dupont Plaza, Inc. After removing any materials of worth, it was demolished in 1947 and replaced by what was first an apartment building, better known today as The Dupont Circle Hotel.

The Imperial Season: America's Capital in the Time of the First Ambassadors, 1893-1918 By William Seale

A History of Dupont Circle: Center of High Society in the Capital By Stephen A. Hansen

Heiresses: The Lives of the Million Dollar Babies By Laura Thompson

The Viceroy's Daughters: The Lives of the Curzon Sisters By Anne de Courcy